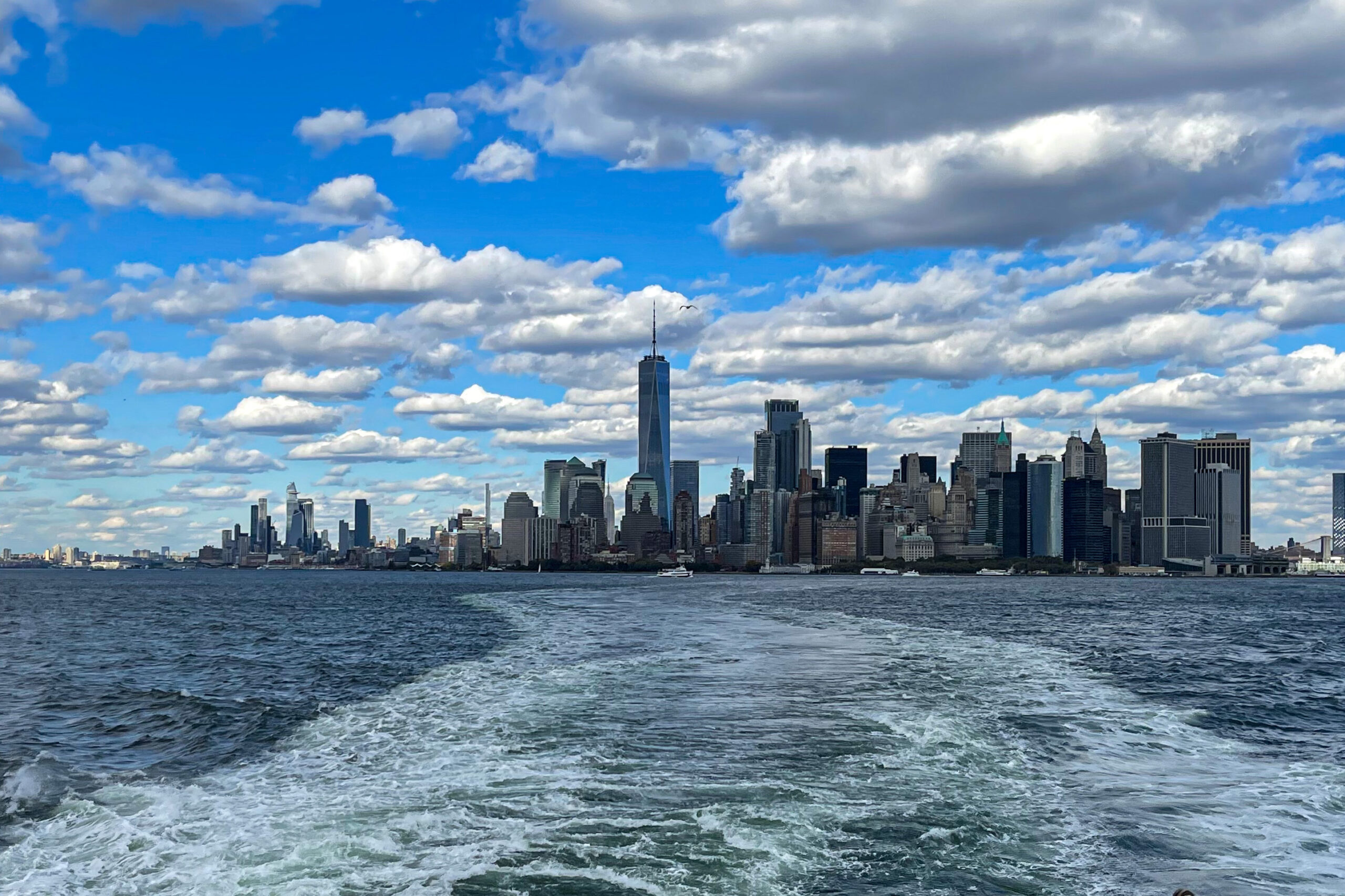 Times Square is bustling with vendors selling New York City tours. To avoid going on a  tour that’s not good, it’s best to do your research about the tour company before booking. Viator, the tour company we used was recommended by an event planner. I checked them out and read some of their reviews before I booked our tickets.

Viator is a TripAdvisor company which means, it’s a good one to have a look at if you’re interested in going on a city tour. The benefits of doing a city tour are huge. You get to have a glimpse of the many attractions a city has to offer before deciding which ones (if any) to go and revisit for a more in-depth experience.

What makes a great tour?

1) The tour guide 2) The tour itinerary. A luxury tour vehicle could be the third. Our bus was pretty cool looking.  If the tour itinerary is good and the tour guide isn’t, this could negatively impact your experience. Our guide, Gil was very knowledgeable about the city. The amount of information and history stored in his brain was impressive. One could argue that, if you do a job day in day out, year in year out, you could do it in your sleep.

That said, he seemed like a man who really enjoyed his job. He also had a no nonsense attitude. A part of me felt maybe he could loosen up a bit, but then, a bit of firmness is needed to chaperone large groups around the city. This is because, some people just find it plain difficult to obey instructions! He had to be strict with us to keep to time and agenda. Anyways, Gil was very good, if you ever go to NYC and would like a tour, book him through Viator. I would happily have him guide me again.

The start of the tour

We walked to W 51st to join the tour bus at 10am. The bus leaves at exactly 10am, so you have to arrive before that time. The walk wasn’t long because our hotel was on W 47th.  To my delight, we were put on a luxury tour bus that looked like something from a Hollywood action movie. That’s one thing I like about America, their gas guzzlers can look super cool.  The bus was nice and comfy with charging points for devices. The company also provided a giant cooler of bottled water for us to grab bottles at any time.

What stood out to me on the tour.

No two human can have 100% identical experiences. According to psychologists, we tend to focus on the aspects of an experience that stand out to us and drop or “delete” the aspects that didn’t. What really stood out to me during the tour (though I lived in NYC as a child and have visited several times since), is the architecture that defines Manhattan’s skyline.

I find it so bizarre that this is something I never truly appreciated. Yeah, New York is famous for its iconic skyscrapers, that I know and have seen on previous trips. However, I never really paid attention to the detail on the buildings. In my mind, America is the land of badly built prefab housing. Homes that a huff and a puff from a tornado or cyclone will blow away in seconds. That said, there is America and there is New York City. New York City is like a country in America.

The tour took us through Times Square, Broadway theatre district to Central Park where we stopped to see the John Lennon Memorial, walk past Strawberry fields and a brief stop in the park.  The Dakota building was built between 1880-1884. The Renaissance style architecture stands out. It almost felt like I was in France. This apartment building has been and is home to many well known personalities. It’s also where John Lennon lived and was shot outside it in 1980.

Find the red brolly in the crowd - our tour guide.

The ability to acquire great wealth is a gift

After this, we headed to Rockefeller Plaza. John D Rockefeller….the richest American of all time, what a guy! According to history, after he was told by a Baptist minister to make as much money as he could, he made this famous quote, “It was at this moment, that the financial plan of my life was formed”. He considered making money a gift from God. I lost count of the skyscrapers Gil pointed out the Rockefeller group own.

We stopped briefly at Rockefeller Plaza to walk around and take pictures near the ice rink (which was out of service). Gil gave us the history of the buildings owned by the family on 5th Avenue and around the Plaza. I’ve been to this centre many times on previous visits to the city. Each visit something different stands out to me.

Wisdom to be a billionaire…

We moved swiftly to Madison Sq Park, (where we saw the Flatiron building), Lower Manhattan, Greenwich Village, China Town and Soho. We stopped to grab some lunch at about 1pm. This is my only gripe about the tour, the lunch break was quite short. What made it short was how busy where we had to get food was. By the time my lunch was ready, I had to gobble it down in 5mins. When we raised this point with Gil, he said the tour is not about food, we should have just grabbed some sandwiches. Nigerians? Grab sandwiches? Lol!

After lunch, we made our way to Ground zero the 9/11 memorial site. America is a country that has committed many sins against other nations. How the continent came to be America in the first place is one big great sin imo. It is somewhat understandable how many can have a hatred for America. However, to kill innocent people in such a horrific way is something that I personally will never understand. You can’t go to Ground Zero and not be moved by what you see there.

The final leg was the boat to Staten Island to see the iconic symbol of Freedom, Justice and Liberty for all. All these years, I thought this was an American idea, only to discover that, the Statue of Liberty was gifted to America from the people of France! This colossal statue was designed by French sculptor Frédéric Bartholdi and built by Gustav Eiffel. Yes, you guessed right, the guy who built the Eiffel Tower.

Great view from the ferry

To conclude, this review gives you a 10% overview of the tour. I recommend you book through Viator and hope Gil is your tour guide. It is definitely worth the $99.50 we paid.