What The Train Ride From Lagos To Ibadan Is Really Like 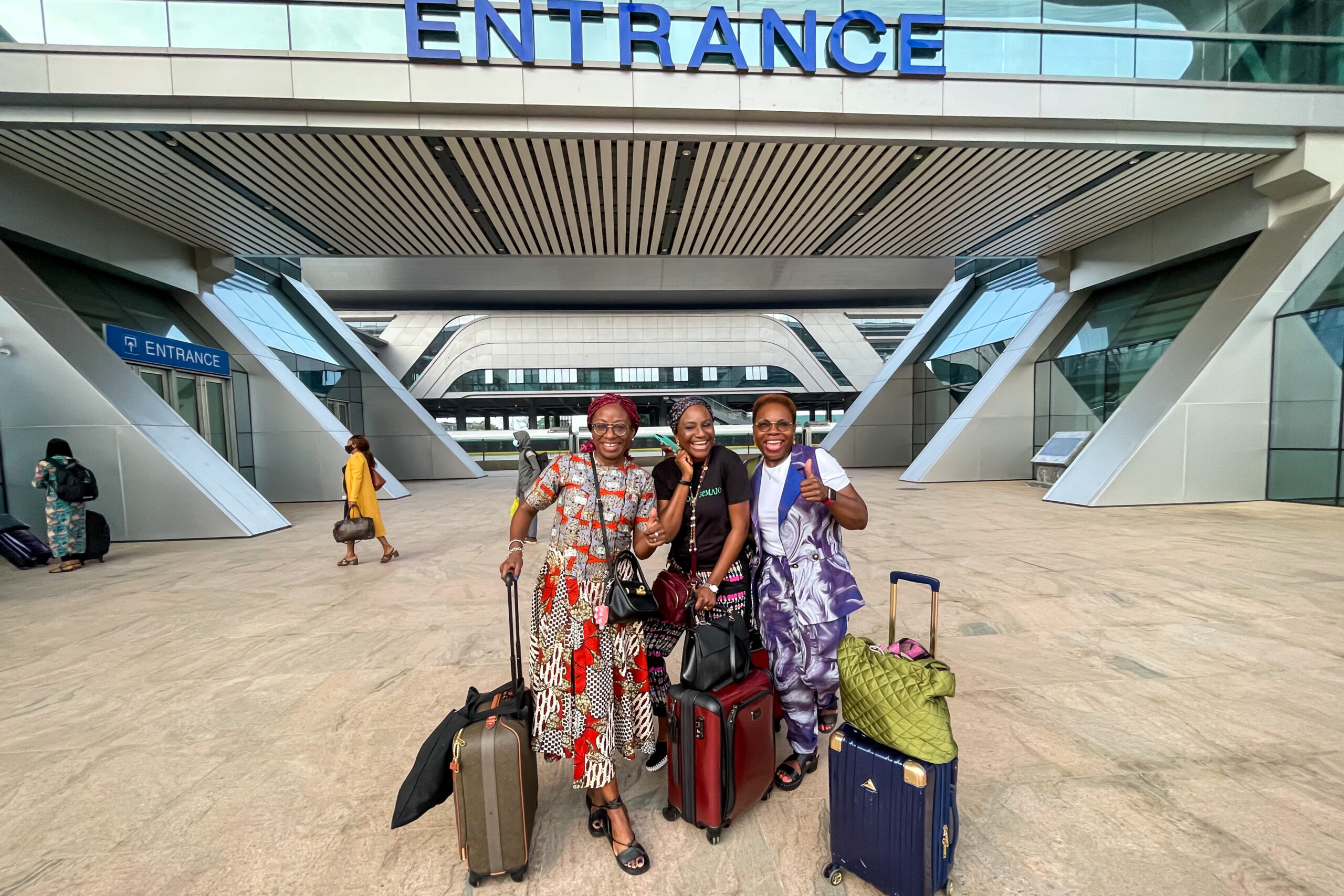 When I heard about the train to Ibadan, the first thing that came to my mind was, “Is it safe?”. I had visions of sweaty armed bandits getting on the train on one of the stops and fleecing us all.

“Is it safe? What do the trains look like? How’s the journey?” I asked a few people who had used the service. No one provided me with a comprehensive description of their experience. Everyone I spoke to had brief but positive things to say about the train ride. Nonetheless, my skeptical mind remained suspicious.

My siblings and I travelled to Nigeria in May for my father’s funeral. After his funeral, we promised Mummy we’d be back later in the year to check up on her. Four out of her five children live outside Nigeria. Four weeks ago, thanks to the mercies of the creator, we were able to  keep our promise. As a result, the opportunity to experience the train ride to Ibadan (where she lives ) presented itself and we went for it.

We head out from the Island to Mobolaji Johnson train station in Ebute Metta Lagos at 5.30am to catch the 8.00am train. When we arrive at 6.17am, we find about 100 people waiting outside the ticket office but not by it’s door. So we proceed to wait just in front of the door. This effectively starts a queue. Consequently, I hear a young lady behind us complaining to her friend that they got there before us. Her friend replies something along the lines of  “those who snooze get outsmarted”.

The ticket office doors open at 6.45am. We make our way to the ticket booth to buy our tickets. No joy can be seen on the faces of the ticket office staff, which is kinda typical of the service industry. The woman who issues our tickets is unsmiling and unfriendly. She asks us for ID, we pay for our tickets in cash (N4.000 each for business class) and we’re asked to step to the side and fill our contact details on a form. We’re given very small flimsy looking rectangular tickets. I wonder how much of the ticket money actually goes through the system. After this, we head to the terminal.

On the way to the terminal, we’re so excited to be at the new train station, we stop to take pictures in the walkway. Oh my! Everything looks nice new and the escalators actually work!!! Zipadee doo dah! Our handbags are checked as we pass though the doors to the terminal and up the escalators we go!

A little history and the reason why we’re all excited

The the $1.3 billion Lagos – Ibadan train line is the handiwork of China Civil Engineering Construction Corporation. This mammoth feat is being hailed by many as impressive given the dismal state of Nigeria’s inefficient, under maintained, underdeveloped railway system. The first rail network in Nigeria was constructed by the British colonial government in the 19th Century. Not long after independence in 1960, the network started declining because of lack of maintenance and inept management (bane of Africa). At the time of commissioning the new rail network in 2017, Nigeria’s rail network consisted of old rusty rickety trains on tracks that desperately needed updating.

Back to present day…

The whole station is shiny, new and of an international standard. There are plenty of seats in the huge waiting room which makes social distancing easy. When it’s time to board, we all head down to the platform on working escalators! I don’t see any clear marking of which carriage is the business class carriage. We find it after first attempting to get on the wrong carriage. Our tickets are checked as we board. Did I mention that our seat numbers were hand written on our tickets?

Wheeling our cases along the aisle reminds me of boarding a plane. To clarify, a brand new budget airline plane. The carriage is nice and new with booths for suitcases and overhead racks for smaller bags and cases. TV screens hang down above the aisles. I can’t hear any sound from the screen, maybe I need to plug my earphones somewhere to use this feature. No staff shows us how to listen to the movie on the screen and no one seemed interested in it. In addition, the screens are so small, I’ll need superhero vision to watch a movie on it from my seat.  The toilets and wash basins are all clean and I even spot toilet roll in the one I used.

All the seats are covered with ill fitting red seat covers which look tacky. Admittedly, it’s easier to keep the seats clean with seat covers, however, this isn’t a great look for what’s supposed to be a business class carriage. I wonder what the normal carriages are like in contrast.

We depart on time. The air conditioning is nice and powerful. Some might even find it too cold, best to take a jacket, jumper, blanket or shawl along with you. At some point, ticket inspectors come round to check our tickets. The business class section is full.

I spend most of the journey looking out of the window. I was shocked to see life on the train tracks. People were strolling on the tracks as they would on a road, cattle were grazing on the grass, street sellers with tables selling food, clothing and all manner of bric a brac. At some point, I spot what looks like an “okada” moto park. Is this for anyone who wants a ride on the railway line or what?  The thing about Africa is, there’s so much poverty you don’t know if this is born out of ignorance, desperation or someone just being opportunistic. Thankfully, at some point the views get better. The dirty filthy rubbish strewn view is replaced by some nice luscious green landscapes – the Africa we see in some movies.

We come out of Obafemi Awolowo station to a herd of waiting cab drivers. We negotiate with one, follow him to his car which is parked 5-10min way from the station. It takes us about 50mins via the express to get to my mums place in Felele.  Making the journey 4 hrs.  Calculating the time from when we left the Island at 5.30am, the trip takes us about 6hrs door to door. Hmmmm….

First and foremost, that the train works is great. Nigeria has a dismal maintenance culture which is fuelled by corruption and ineptitude. Consequently, EVERYONE hopes the government will maintain this service. Maybe the $11 billion owed to China for the whole project might incentivise the Nigerian government to maintain its rail network.

Secondly, the working escalators. If you’ve ever landed at Muritala Mohammed airport in Lagos, you’ll know why I mentioned this. The train is clean, air conditioned with sockets for charging devises. The toilets are also clean with loo rolls. Having loo roll in a public toilet in Nigeria is huge. Usually there’s none.

Finally, it’s safe. The train is so slow, if it ever crashed, everyone would survive. Hahahaha!

Just joking. What I really mean is, it’s safer to travel on the train than the treacherous Lagos-Ibadan expressway. God help you if you’re on the expressway when a petrol tanker overturns. You could be stuck in ensuing traffic all day. What would you do if you needed the toilet?

The most obvious has gotta be paying for tickets. In a country where money changers carry POS machines around at parties, it baffles me that one can’t buy a train ticket online or pay with a card at the station. After over a year of operating, there is no explanation on earth that makes cash only payments justifiable. If we’d bought our tickets online, we wouldn’t have to leave home at 5.30am for an 8.00 am train.

Following buying the tickets, the form we fill with our details after paying for the ticket. What is it with Nigeria and form filling? My goodness! It’s a waste of time and paper. We are in the Techno era for Pete’s sake! Wasn’t setting up a payment system part of the deal with China?

Thirdly, the bar section is non functioning. Jollof rice or meat pies would be great. Hahahahaha!!! Okay, this would stink up the train. On second thought, no jollof rice and meat pies. Teas, coffee and biscuits perhaps?

A whopping 2.48 hours from Lagos to Ibadan??? This is bloody slow!!! I’m pretty sure the trains constructed by the British in 1898 were faster. Admittedly, faster trains would probably be dangerous given the amount of life around the train tracks.

Also, cars aren’t allowed to park just outside the station. Yes, I’m into fitness, but it would be great not to have to trek on red soil for 10min to get a cab.

Another thing is, Moniya is not in Ibadan but Oyo State. It’s a 50-60min drive from Obafemi Awolowo station to Ibadan. This makes the journey 4hrs. On a good day, the expressway is faster. I hear there might be a stop in Ibadan in future. If true, I hope this will help shorten the travel time.

Last but not the least, the late departure time from Ibadan back Lagos makes it difficult to get the train back to Lagos, so we didn’t. More train times need to be added to the timetable.

The experience is a POSITIVE one. The cons are all things that can be improved upon. Safety is number one in Nigeria, better to travel safe than travel fast.

I end this blog post with the words of Nobel Laureate Wole Soyinka who I read uses the service often, “a very impressive work in progress considering the difficulty of really executing anything in this country.”  Note the words “work in progress”.

PS – Don’t forget to watch the attached videos for a visual.

This Is One Place You Must Visit In Lagos.

Review Of Nice Restaurants To Visit In Lagos.