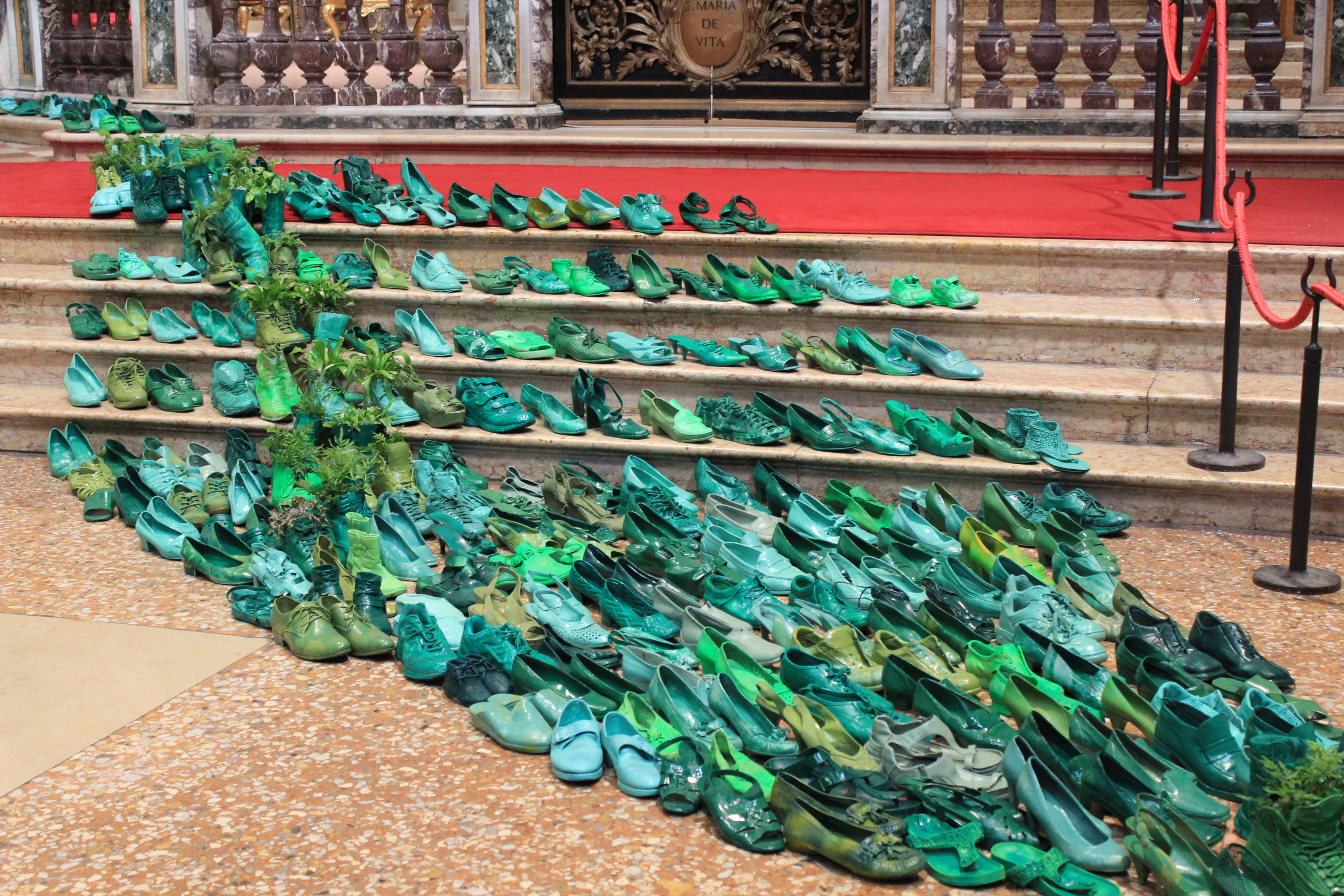 Our last day in Italy started out nice and relaxed. We strolled down to the Impero cafe on Via del Orefici instead of the cafe we usually visit on Strada Maggiore. The Pistachio croissants at Impero are soooooo good!

Via Del Orefici is a street with nice places to eat. You can visit Eataly, a place to eat Italian food, shop and learn.

Things that caught my eye as we strolled around the old city.

Shop window displays on Via Farini and at Galleria Cavour

Liberia A Nanni on Via de Musei is a huge Parisian style 1920’s style bookshop, It’s one of the oldest bookshops in Bologna (founded in the 1825 ). The library specialises in rare and ancient books and magazines and is used by universities in Italy, Europe and America. The library also has a section for other books and magazines like textbooks, comics, travel magazines.

The World of Walkers exhibition in the Church of Santa Maria in Vita on via Clavature.

400+ green shoes placed along the steps inside the church of Santa Maria. Inspired by the 2015 encyclical letter from Pope Francis “Laudato Si” (care of our common home) which is a call on all people of the world to take care of the planet and save it from the devastation of global warming, consumerism, environmental degradation.  http://m.vatican.va/content/francescomobile/en/encyclicals/documents/papa-francesco_20150524_enciclica-laudato-si.html

Then! I finally get to go to Sfoglia Rina restaurant on Via Castiglione. I’d been wanting to try it out since we arrived in Bologna but, because it’s a lunch time restaurant that closes at 7pm, we were never able to make it on time. It has Wagamama style seating with chalk board menu.

The waitress brings the board to you with paper and pen, you place your order and hand made freshly cooked pasta arrives within 15-20mins.

We notice that the Basilica Di San Petronio is open ( we were usually at the Piazza during it’s closed hours) and go in to have a look around. The church is the 6th largest in Europe.

After a nice relaxed and very enjoyable last day, we got to the airport ahead of time for our 7pm British Airways flight to London only to be told after waiting about 3 hours that the flight was cancelled. We had to spend another night in Bologna, get a train to Milan early the next morning and catch a flight to London from Linate airport. That experience defeated the purpose of booking British Airways. We expect better from the airline.