We set off nice and early-ish from Bologna and arrived in Florence at about 10am by train. I noticed the graffiti on the walls as the train sped past and thought about how the graffiti artists risk their lives to paint the walls by the train tracks.

I had a list of things I wanted to see in the city,

😂😂😂 Okay, okay, I had other attractions in mind but, when I’d seen Michelangelo’s masterpiece, It felt like nothing else needed to be seen. The sculpture really is the essence of Florence. 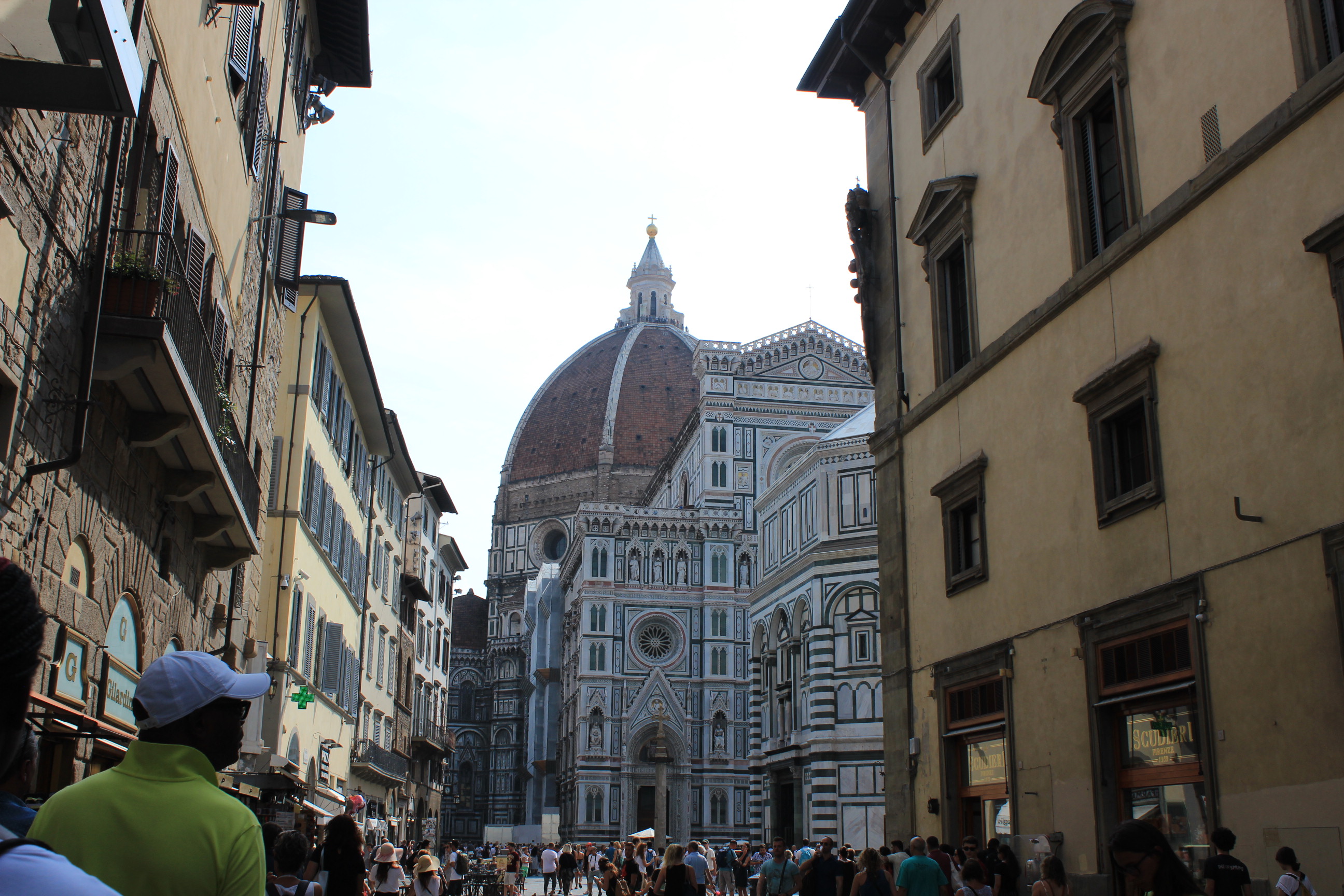 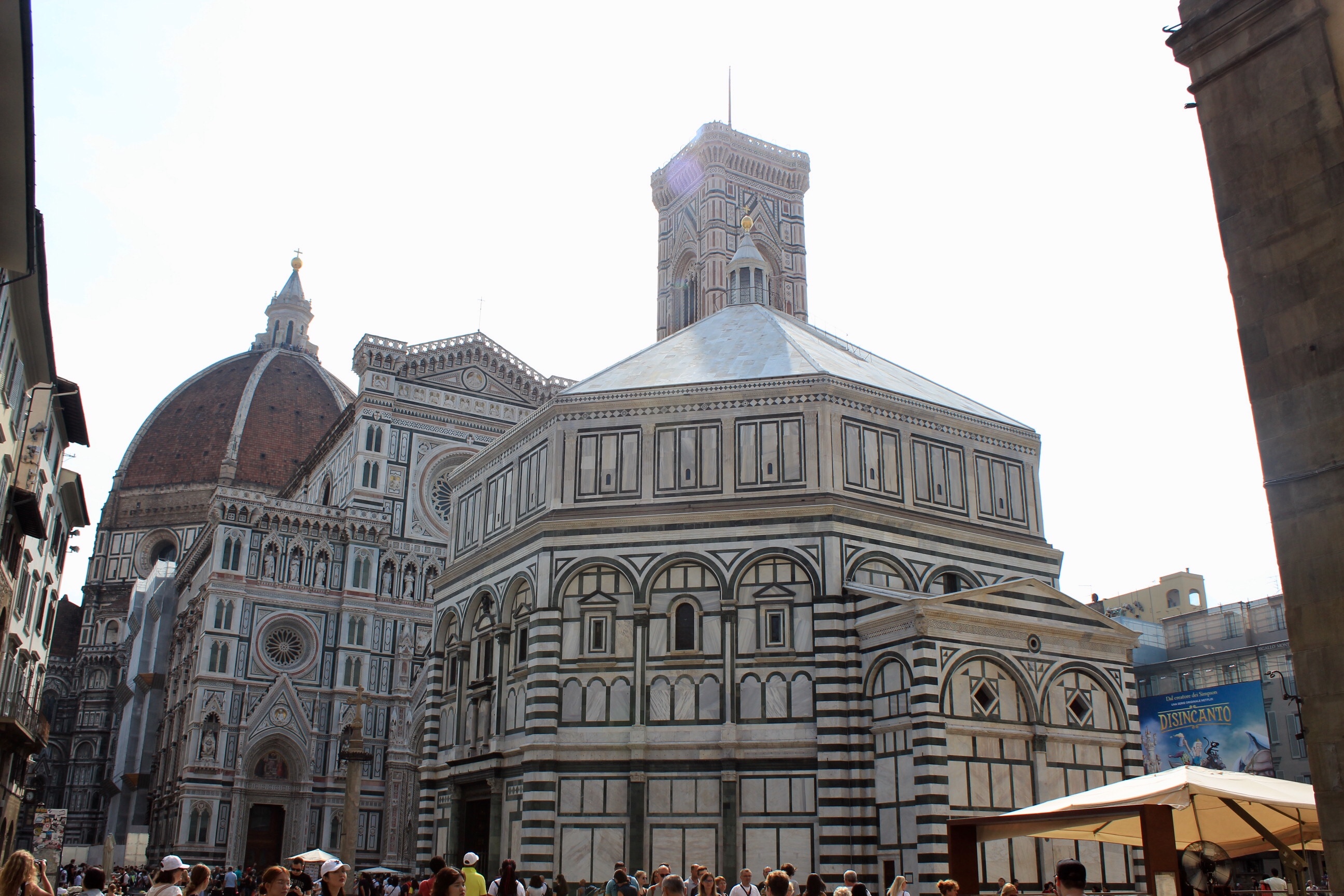 The plan was to head straight to Galleria Dell’ Academia where the statue was erected.  We walked from the station along Via de Diacceto and passed the magnificent structure that is the Duomo (Cathedral of Santa Maria del Fiore) on our way. 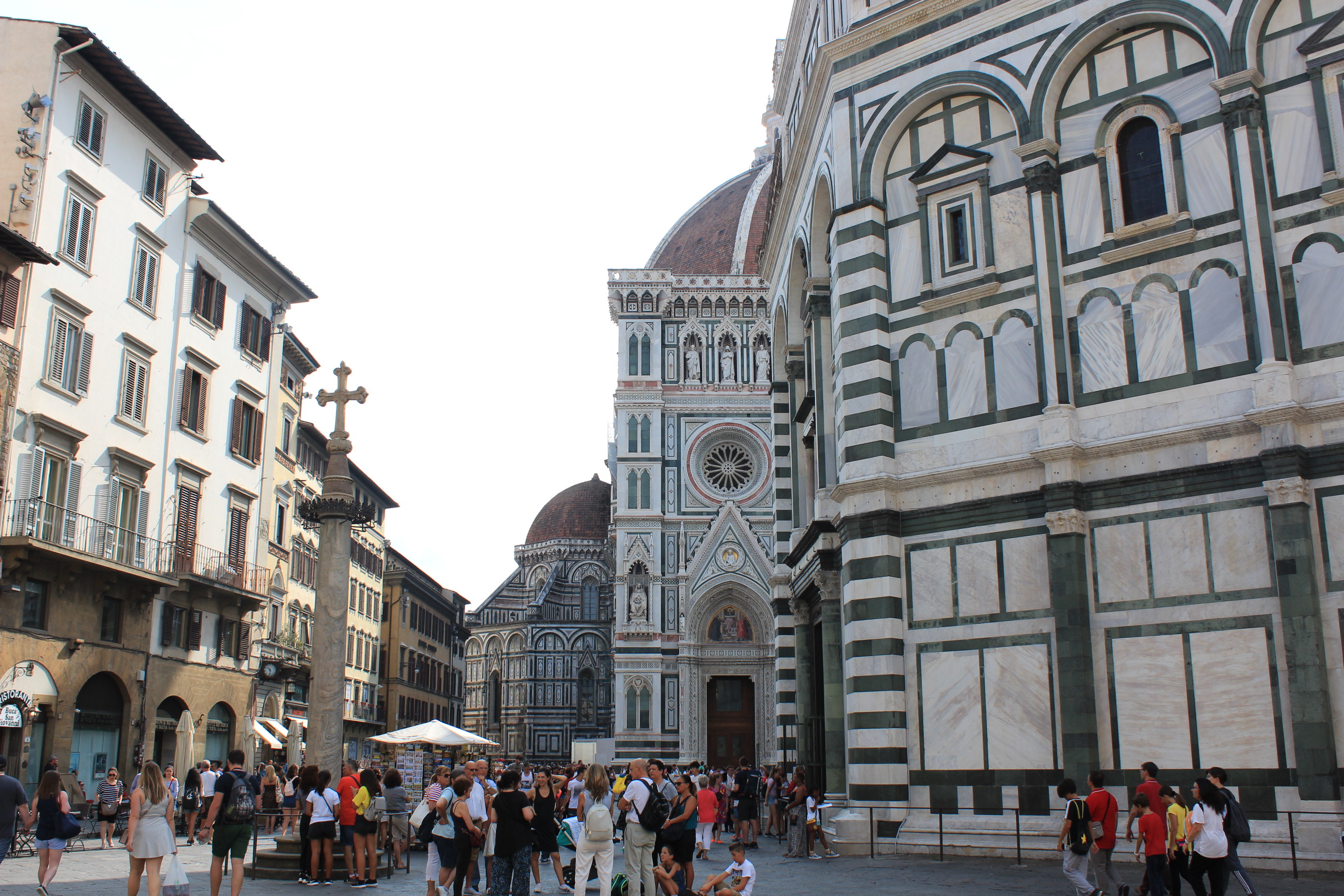 The queue to go into the cathedral went all the way around the church. With only a day in the city, there was no way we were going inside to look around the cathedral. There are companies that operate around these attractions, trying to sell you fast track tickets, be careful not to fall for it, you’ll buy their expensive tickets (entry is free), and (we were told) join their fast track queue with possibly 500 other people.

The Duomo completed in the 15th century, is a magnificent sight made of white and green marble, bronze, carvings, sculptures, paintings which took over 140 years to finish. 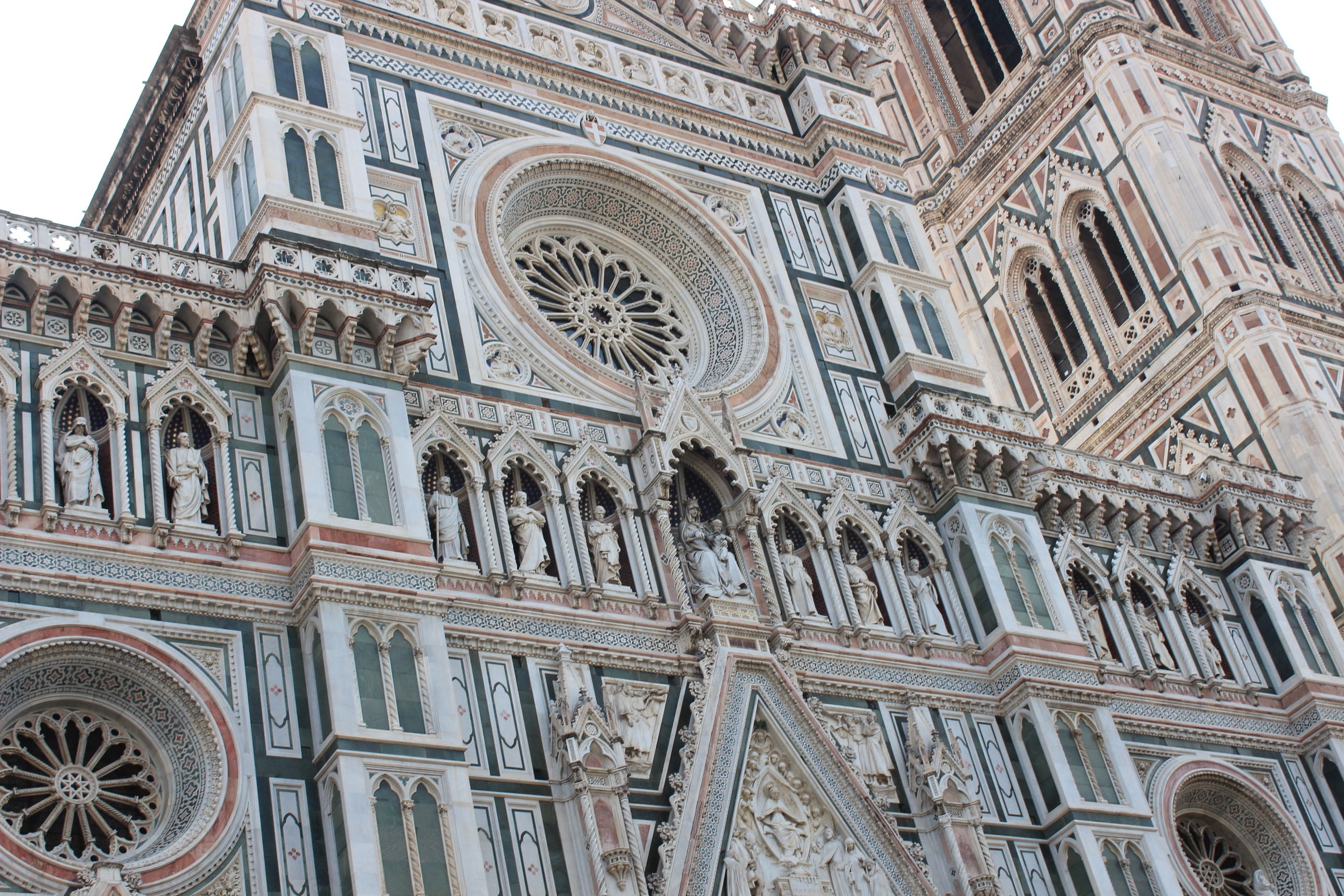 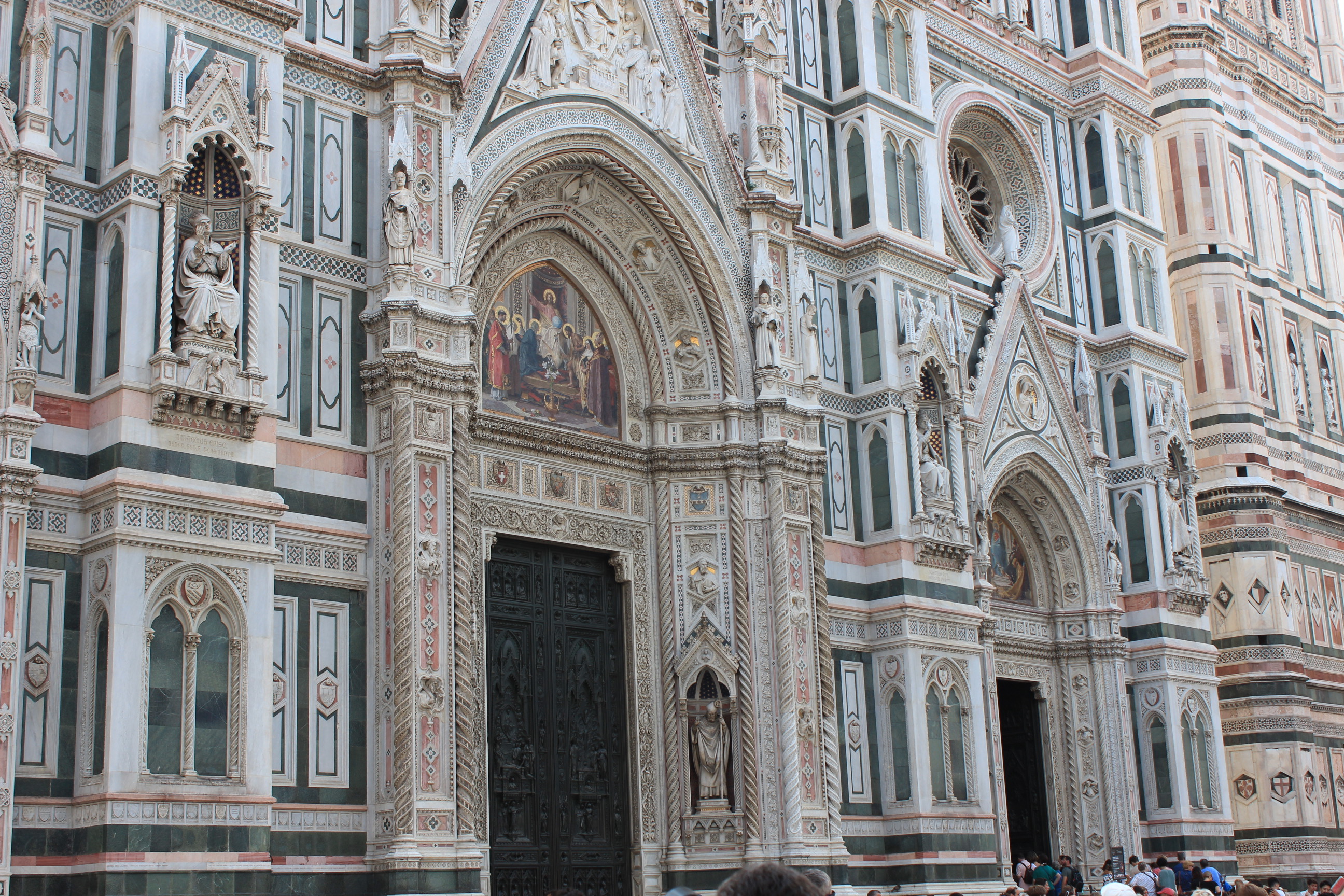 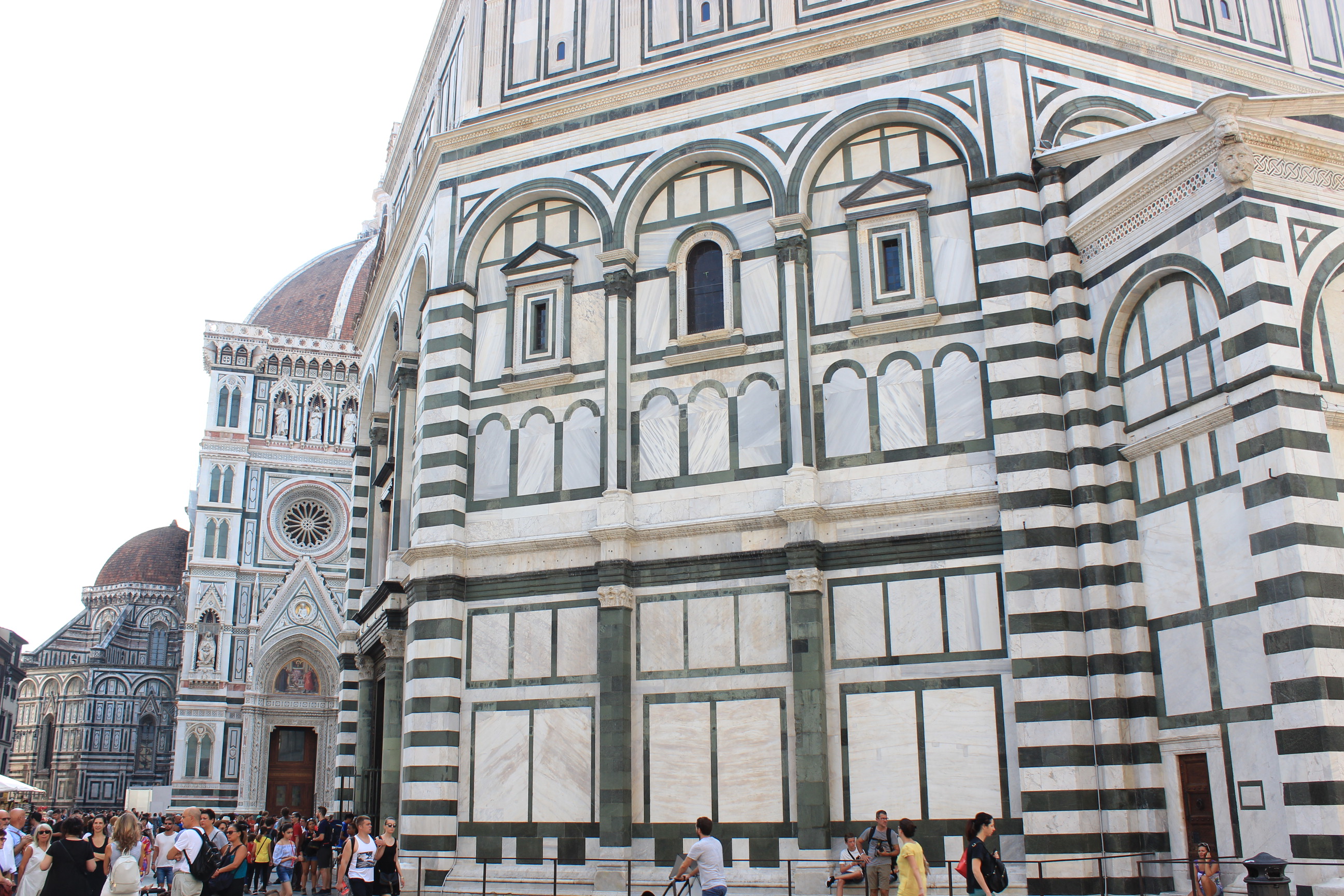 Interesting historical facts about the cathedral 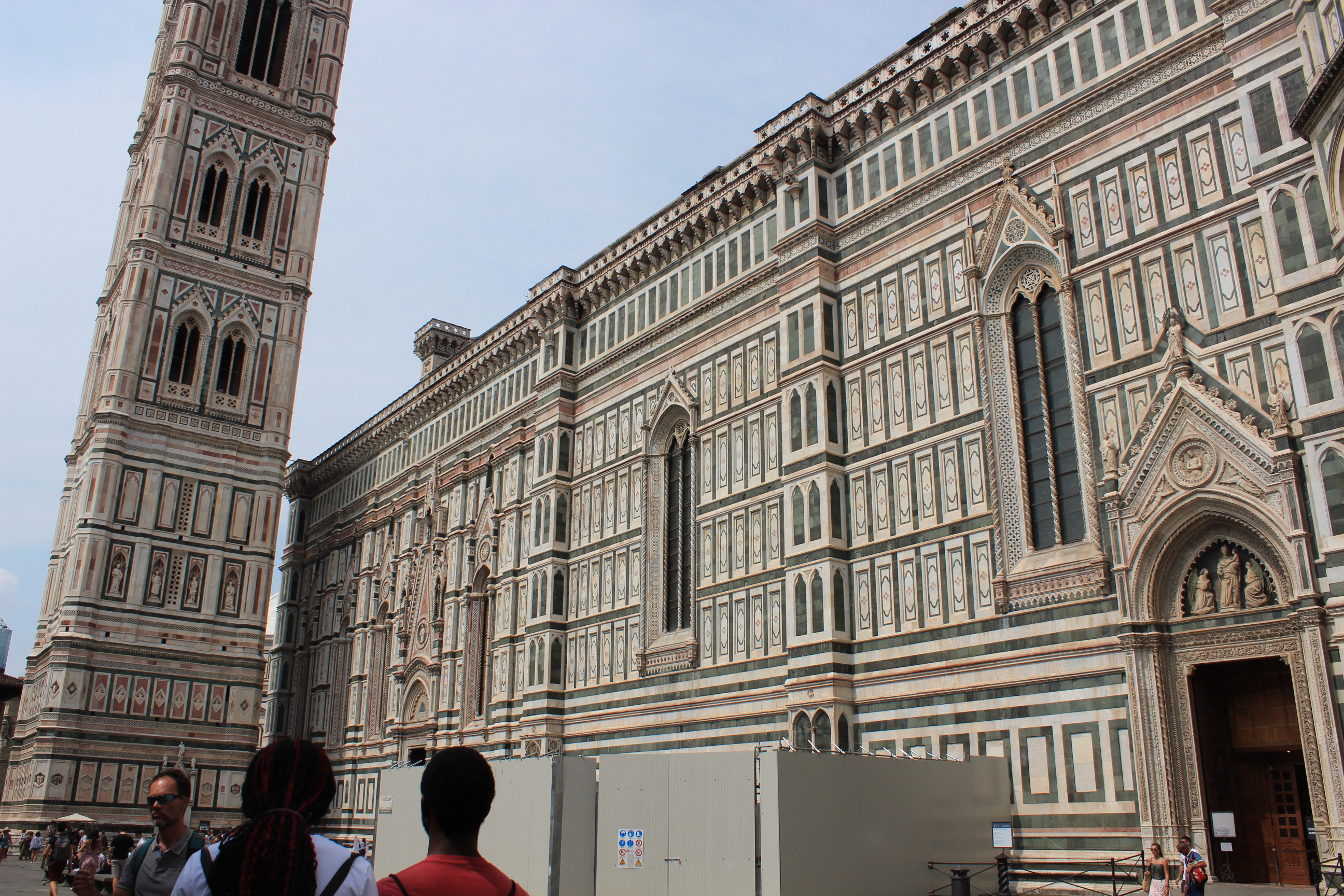 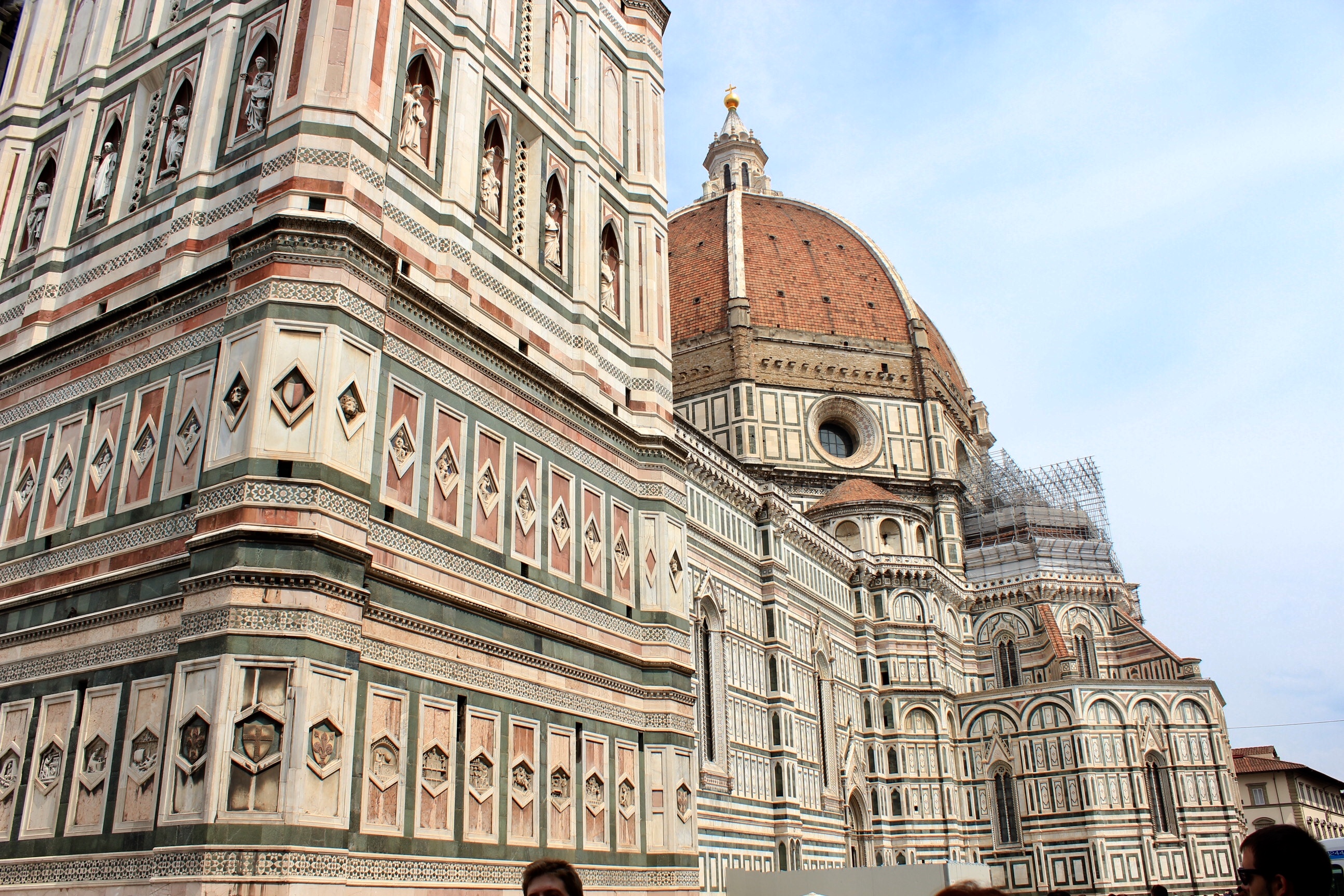 The Dome of the cathedral.

We swiftly made our way to Galleria Dell Accamedia to see The David. I was hoping that the queue would not be long, that everyone would be queuing to get into the Cathedral first.

And that was the case! The queue to get into the gallery was only 10mins long.

Looking down the hall at the marble sculpture of David by Michelangelo, you feel a sense of awe at the work created by this great artist in the 16th century.  It really is a masterpiece! It has a magnificent presence. The atmosphere in the room is one of awe. 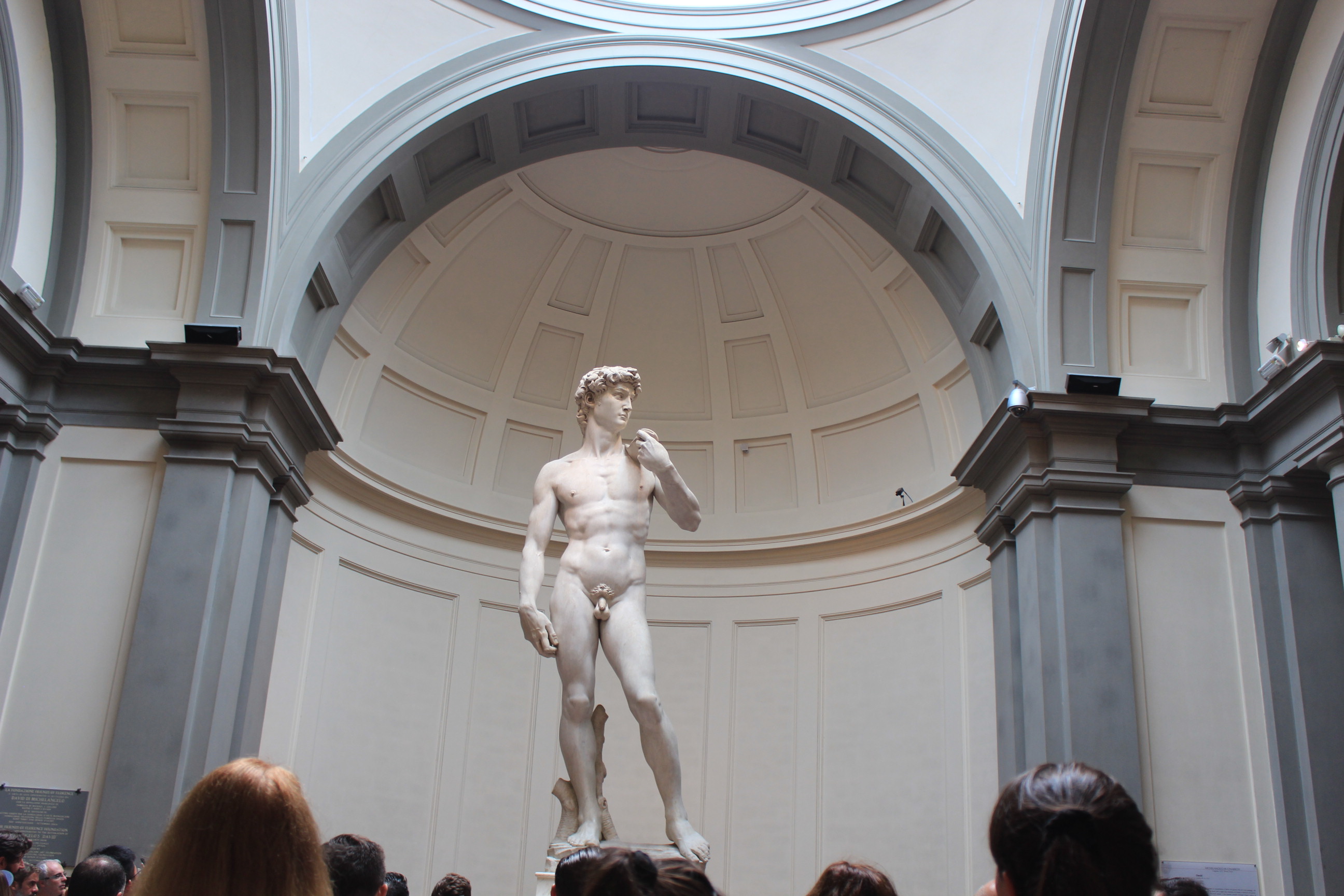 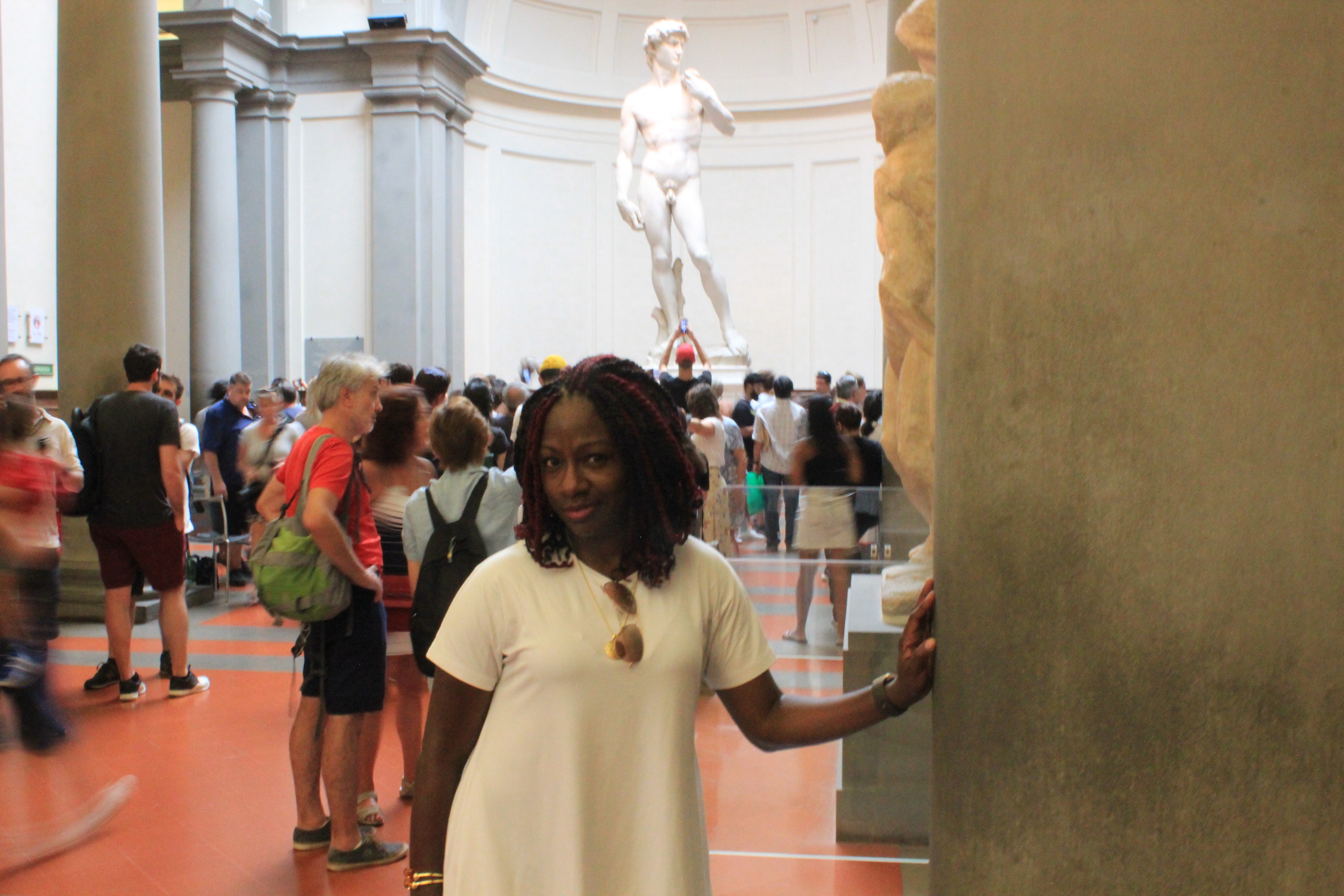 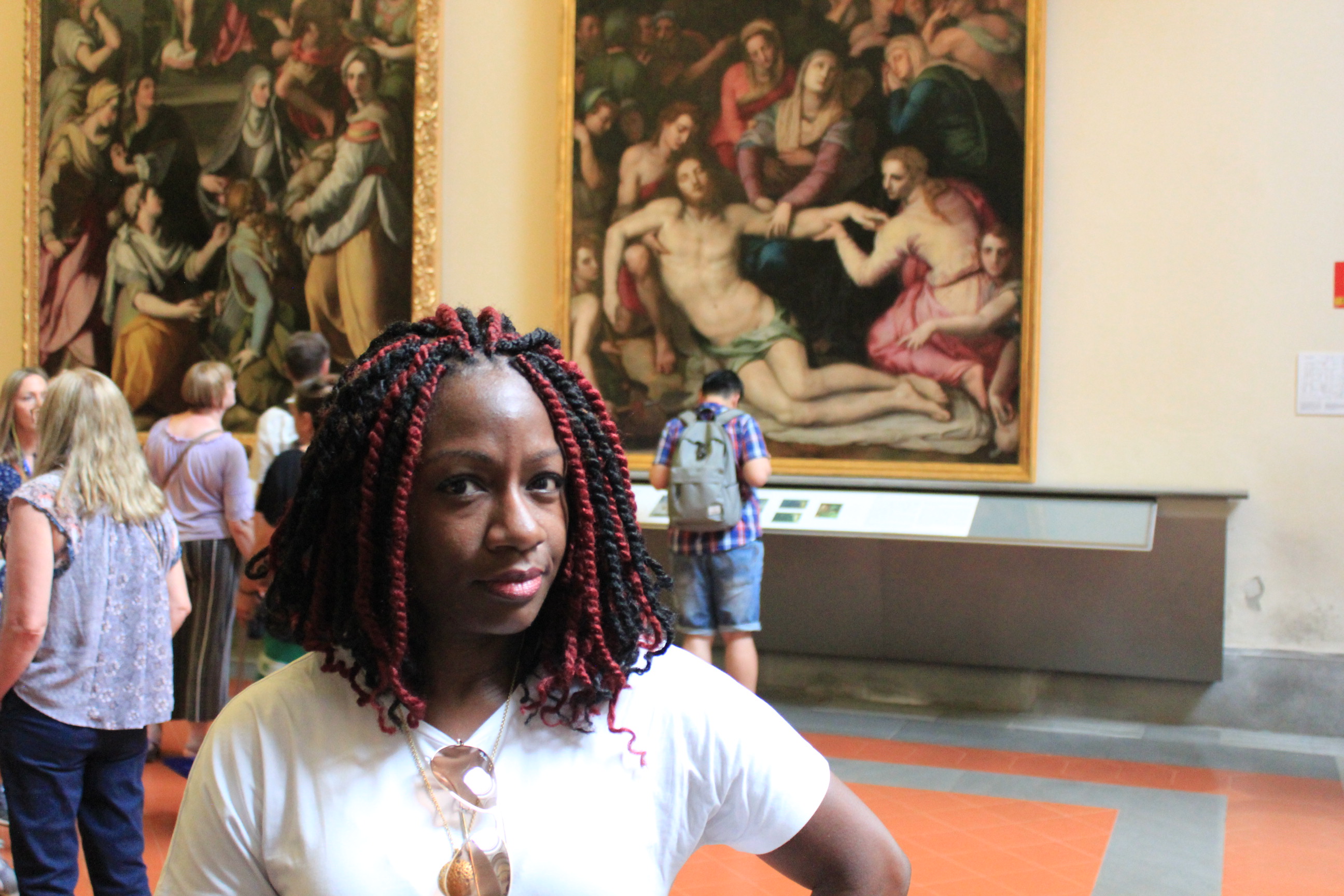 Kash got down to his daily business of sketching as many sculptures as he could fit into the time we were there whilst the rest of us were taking pictures. Even though he stood/sat quietly in corners of the hall, the sight of him sketching seemed to interest tourists who asked to take a pictures of him sketching. 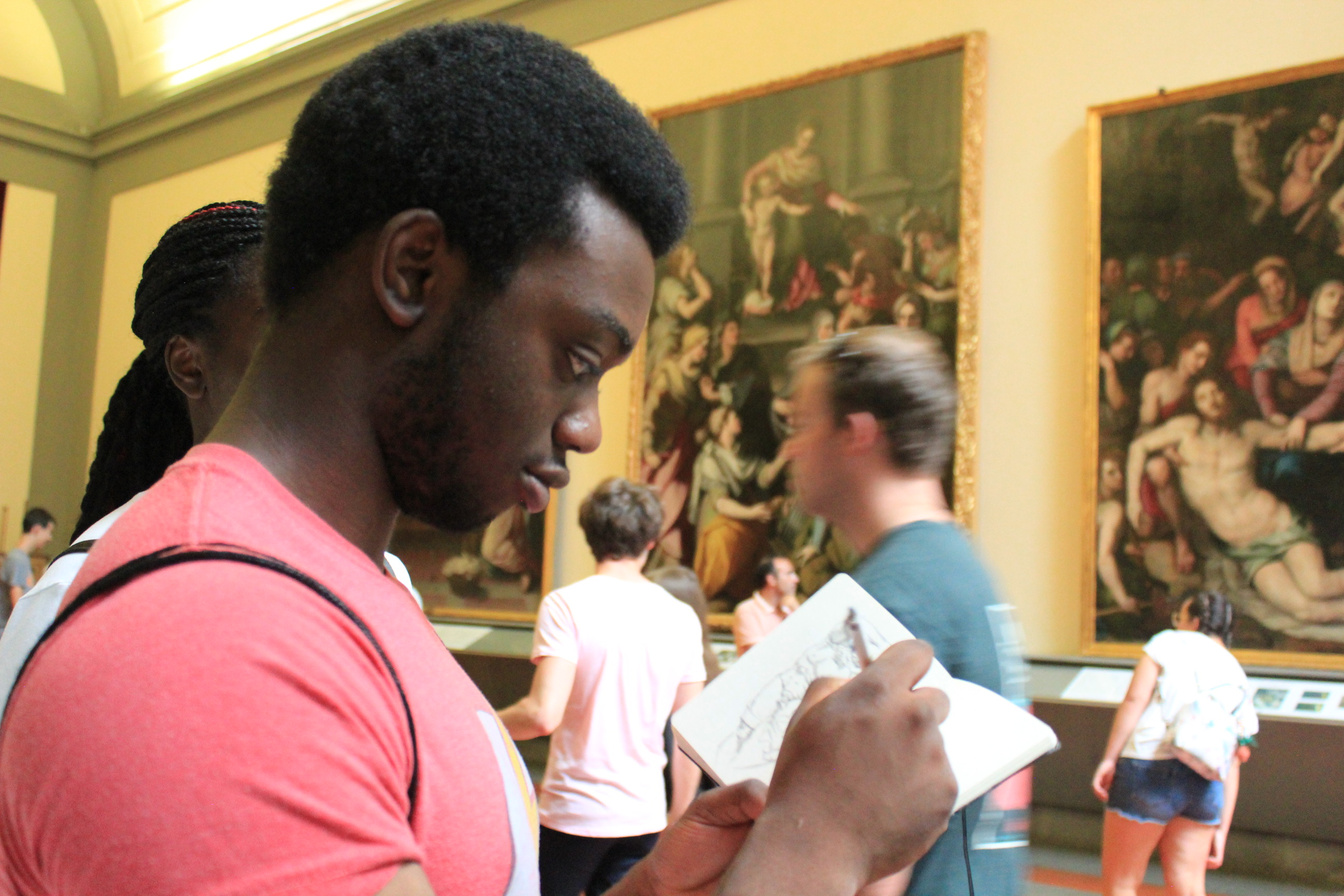 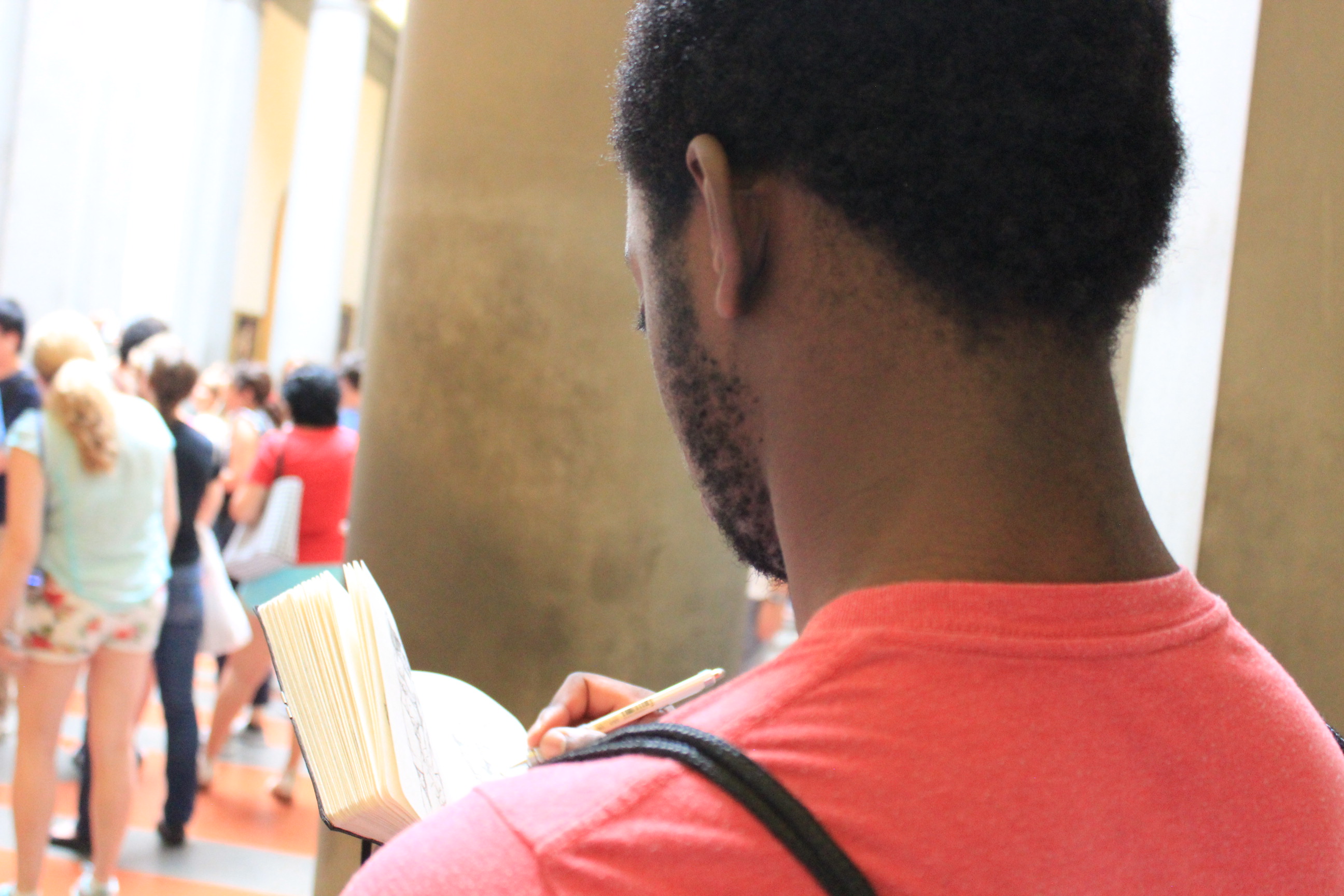 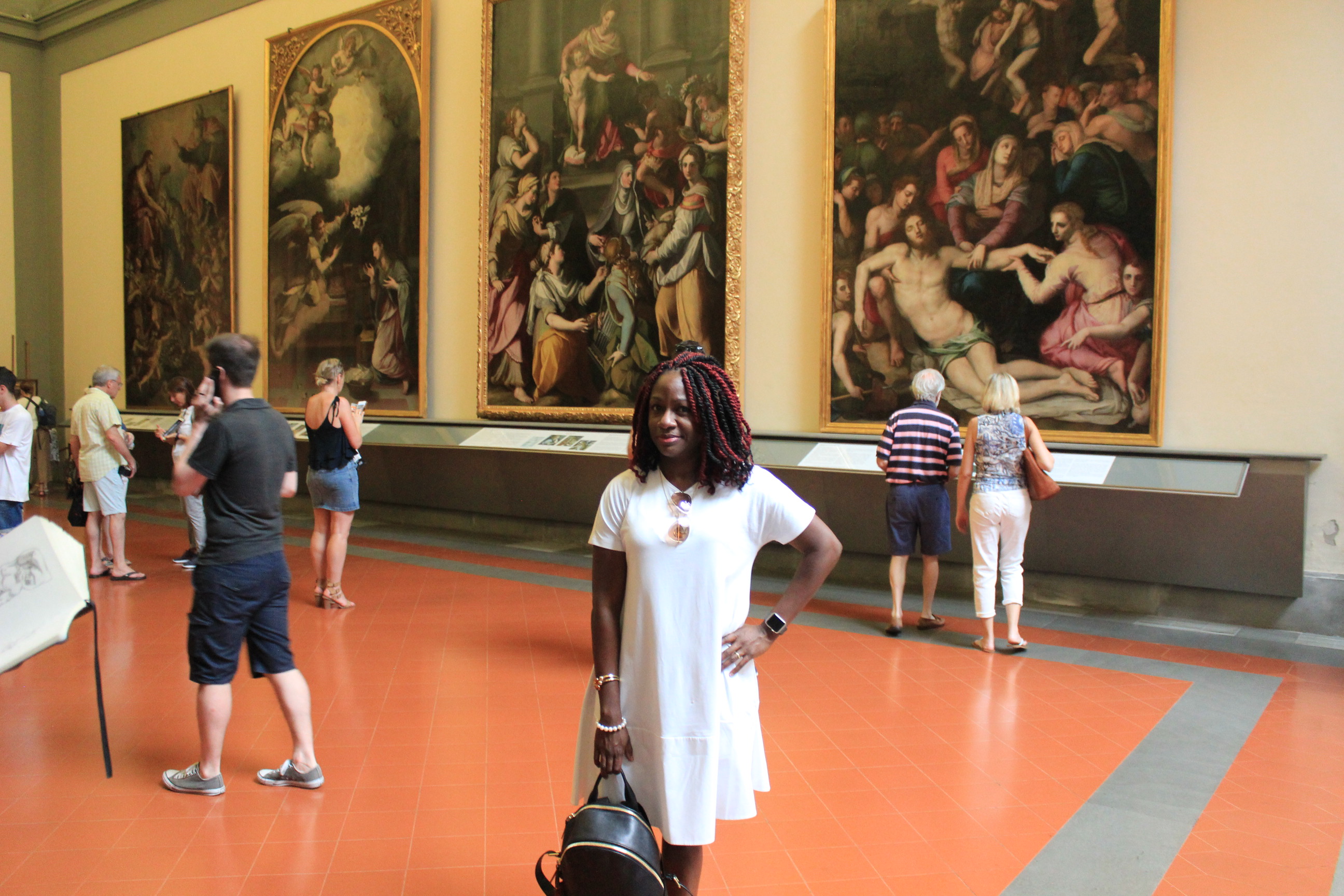 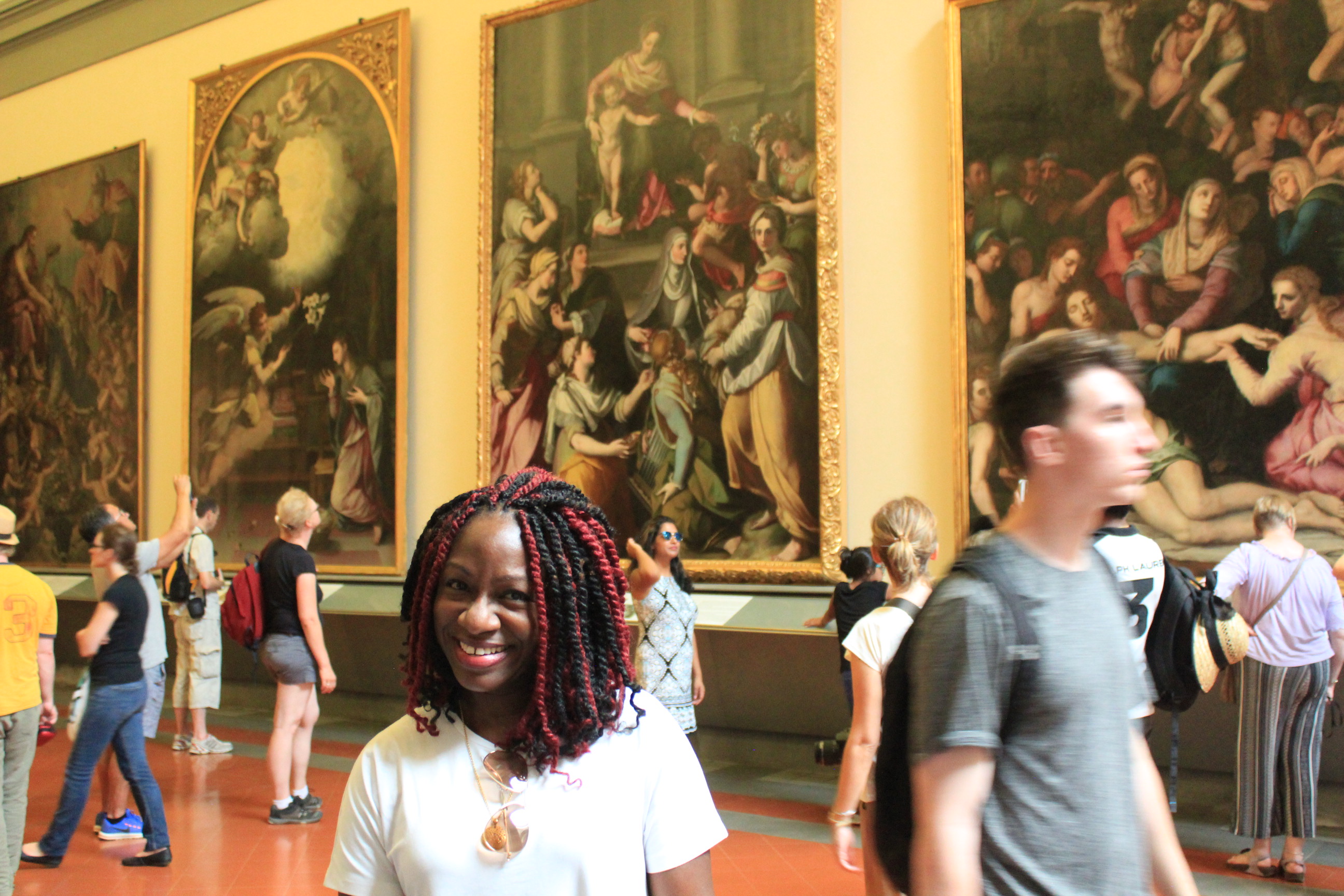 After about an hour, we left, walked past the Cathedral again, I stopped to get my daily gelato fix and headed for Piazza della Signoria to see Palazzo Vecchio.

Palazzo Vecchio (1314) is the representation of Florentine power. It is currently hosts town hall offices and valuables. It is also home to the Museo dei Ragazzi. The palace was built in form of a a castle with a tower and a replica of The David is one of the statues in front of the palace. We didn’t have time to go inside, but it’s worth having a look, which will be something for next time. 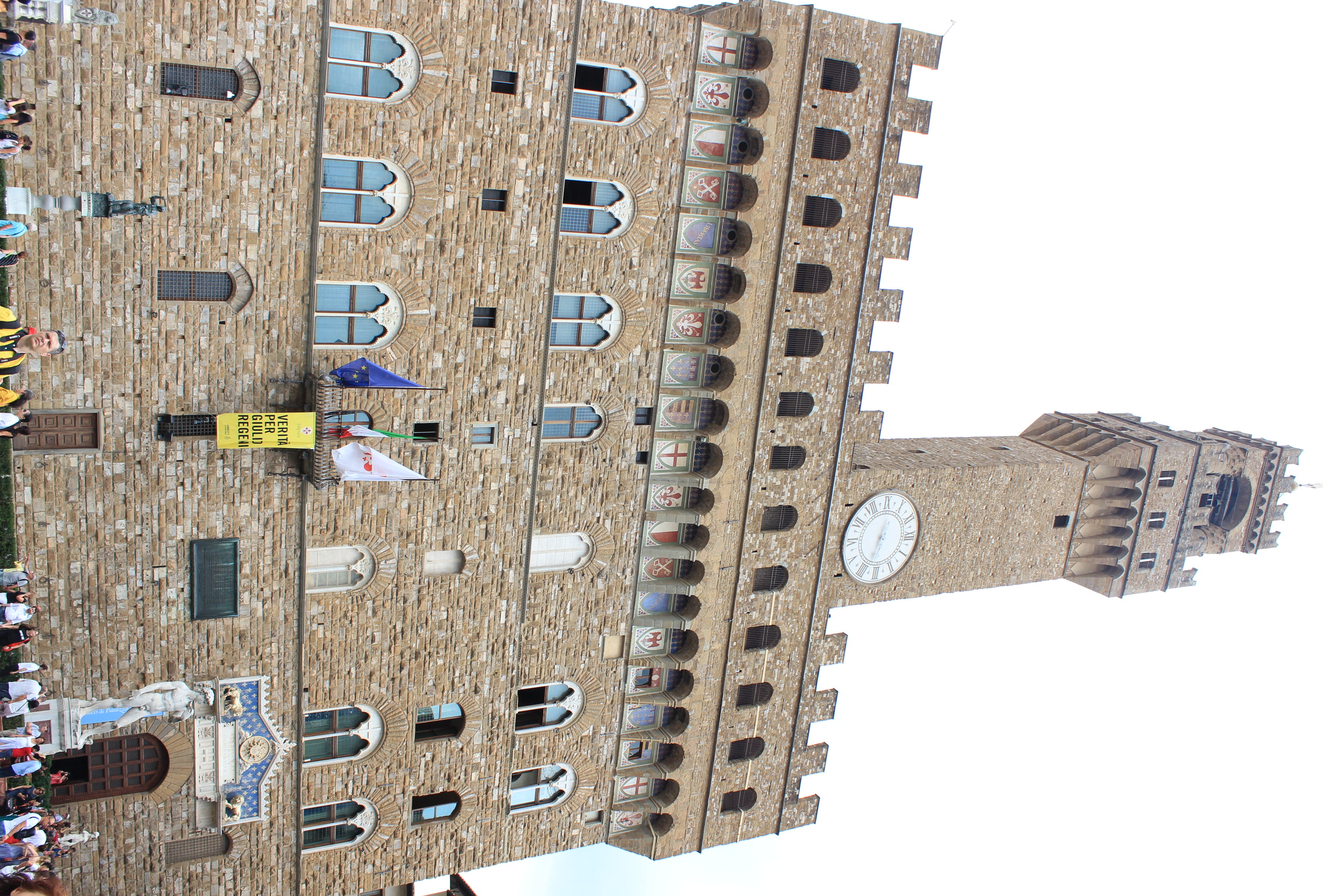 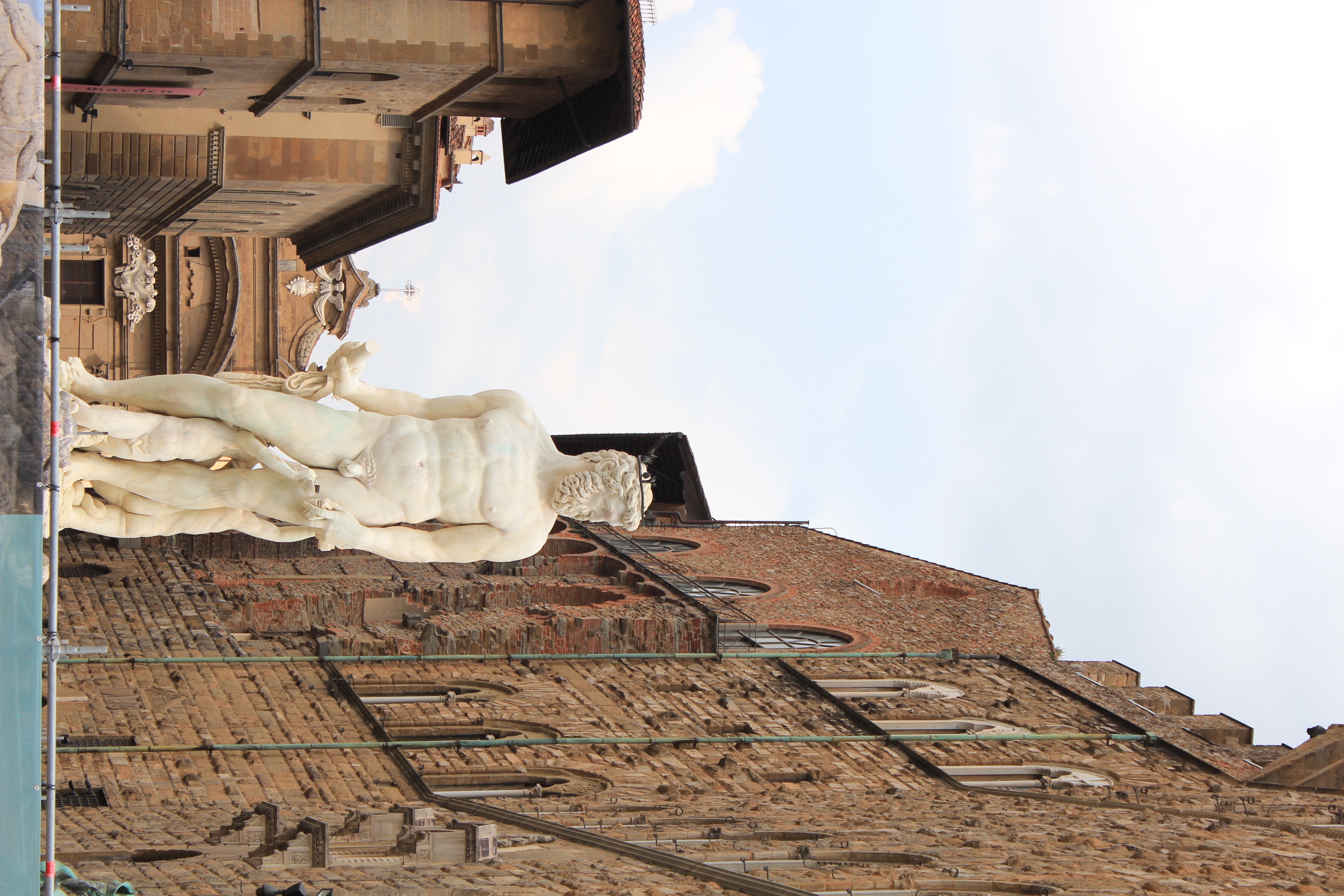 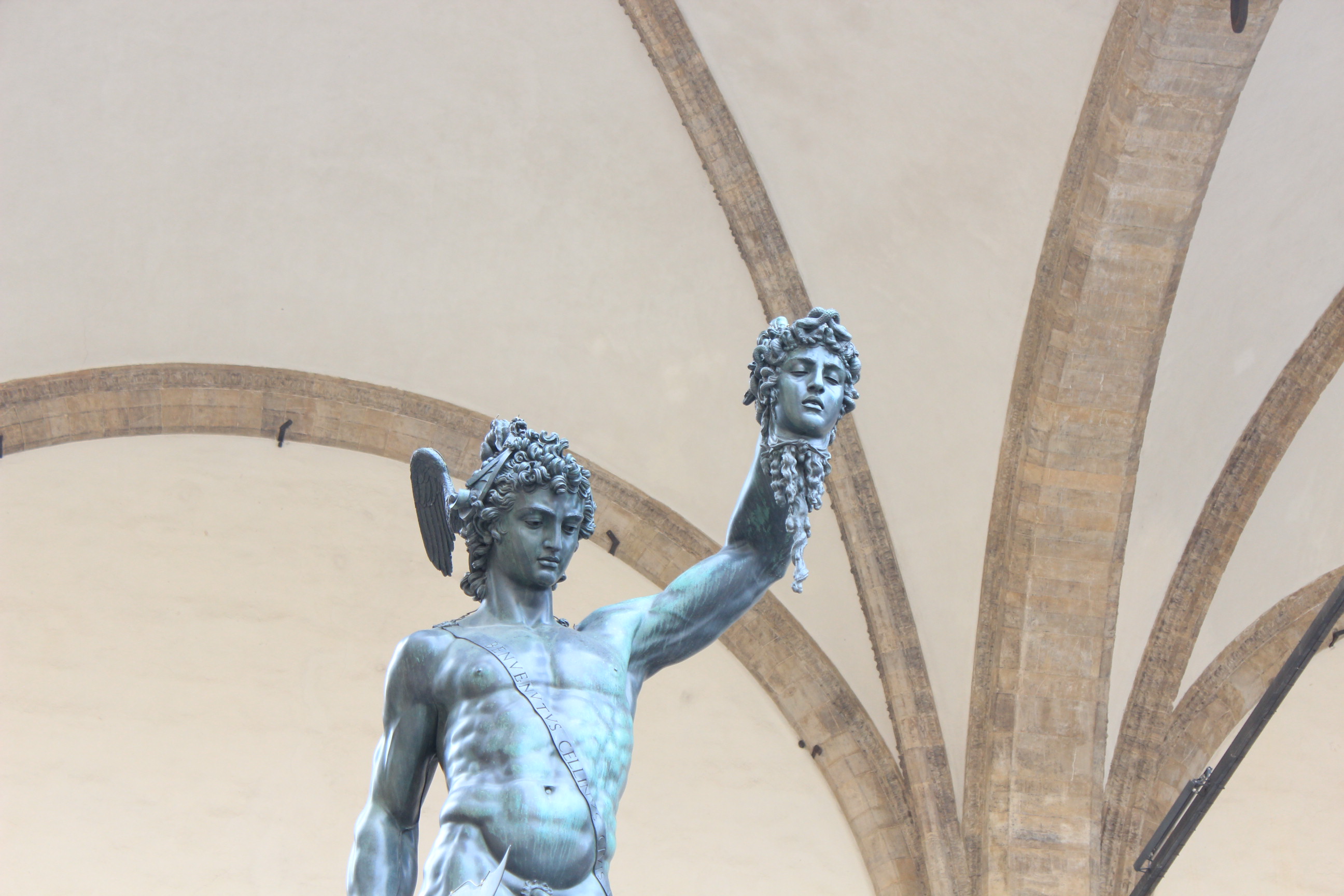 Ponte Vecchio “Old Bridge” is the most famous bridge in Florence. On both sides of the bridge are shops selling lovely Italian gold jewellery. Over the bridge leads to Palazzo Pitti, once home of the Medici family. 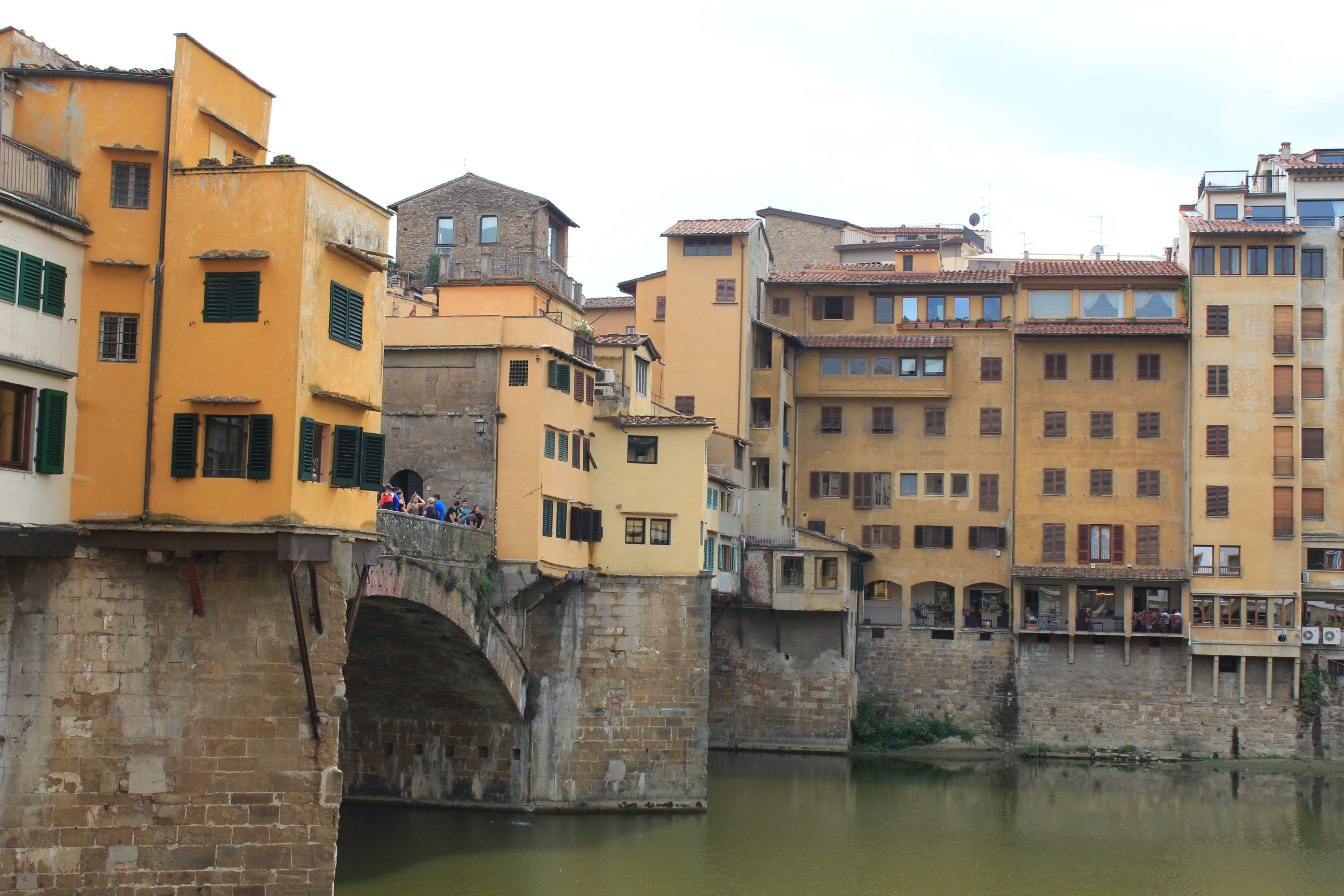 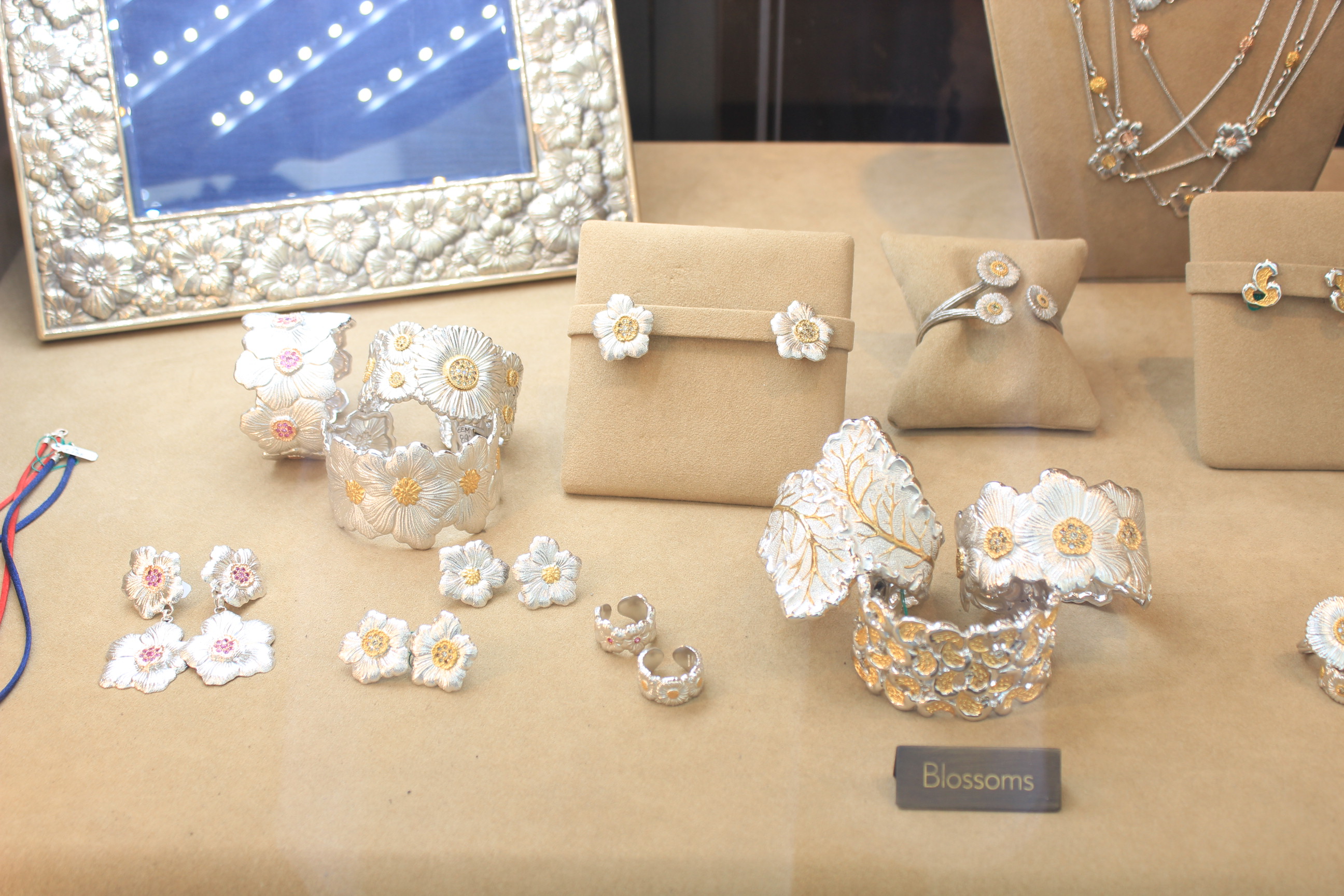 Palazzo Pitti, once home (1550) of the Medici Family now houses 4 museums, Treasury of the Grand Dukes, the Palatine Gallery, the Modern Art Gallery and the Museum of Costume and Fashion. 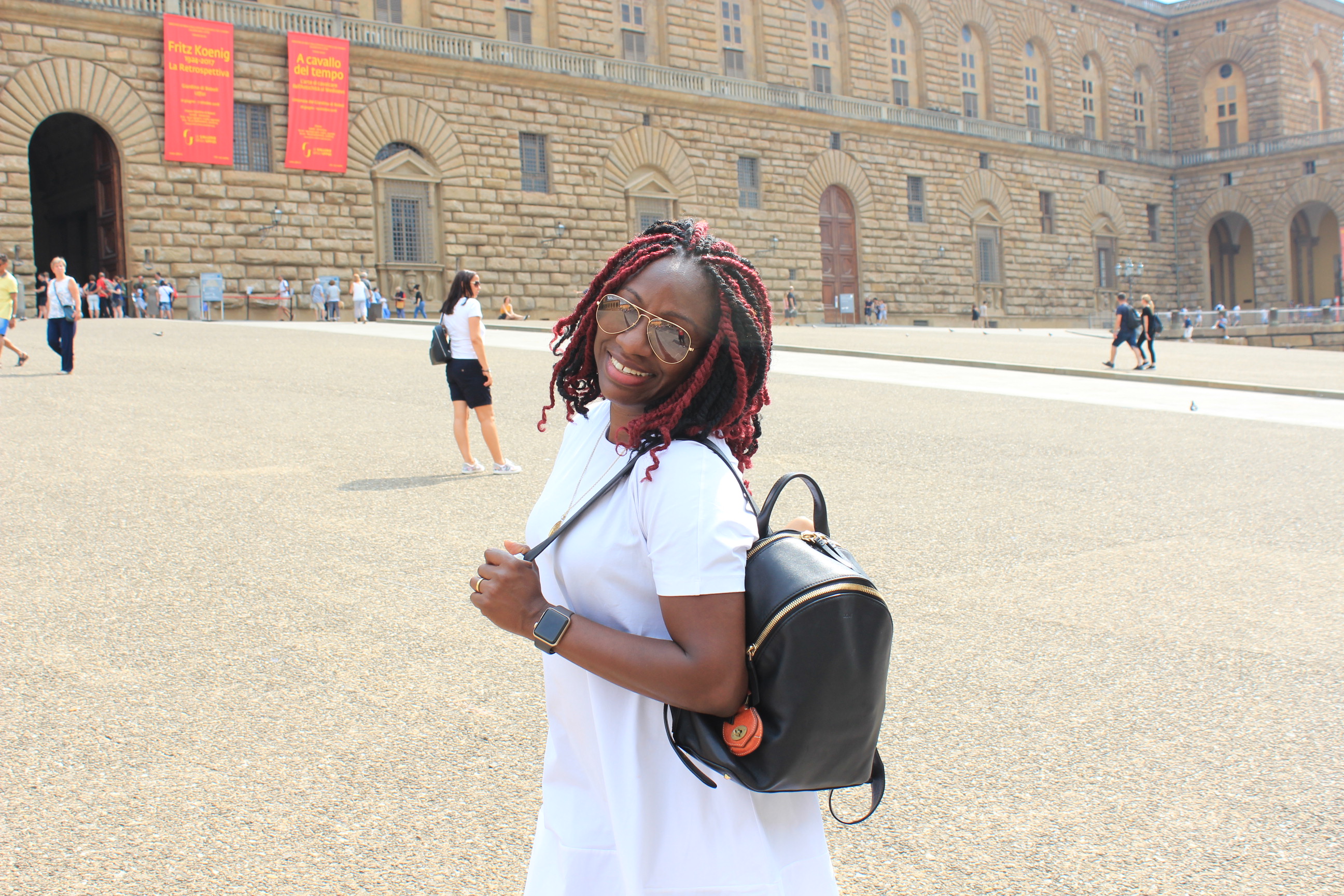 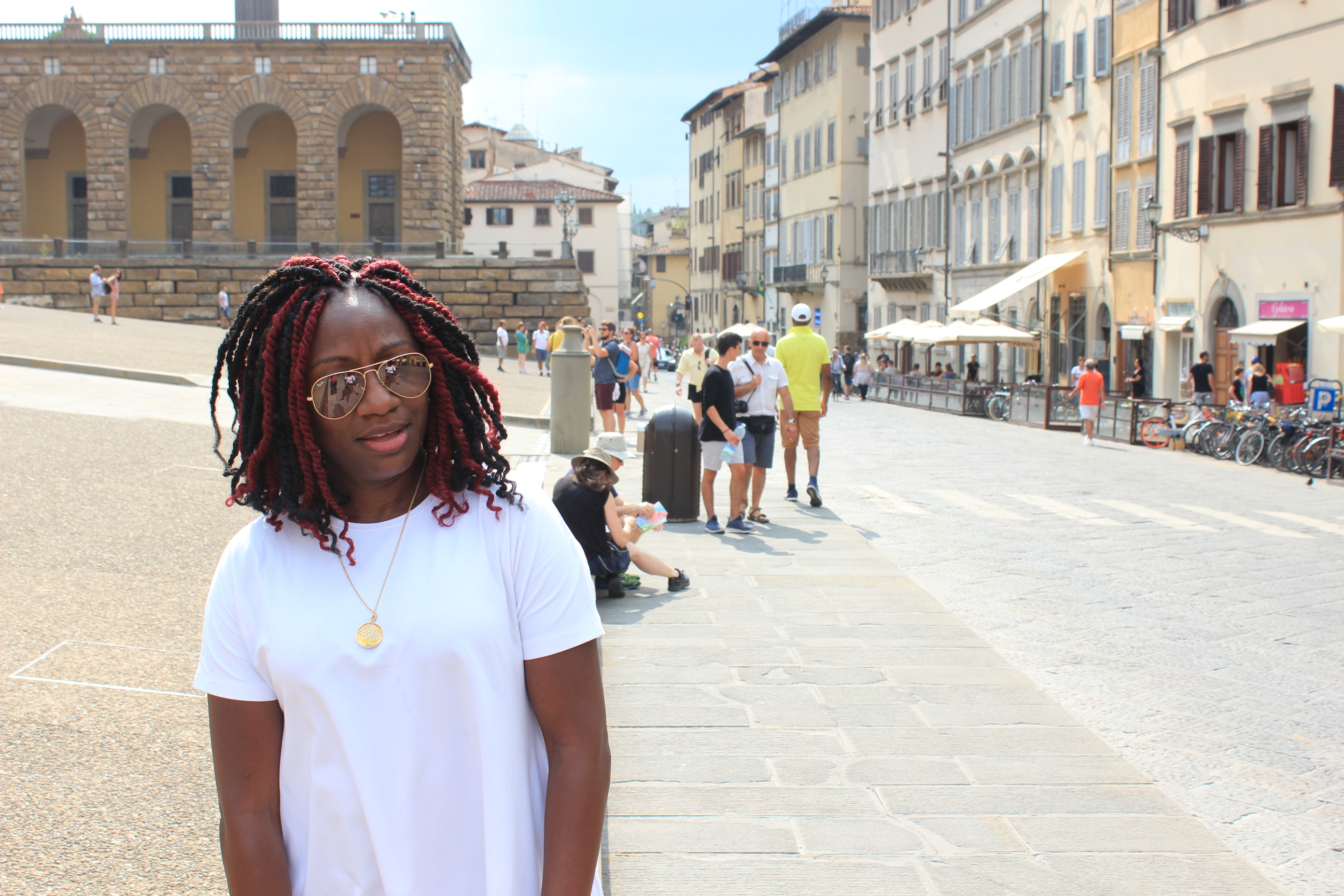 Imho, the smaller Mercato market (2 mins from Palazzo Vecchio) had nicer bags and I did find a nice little lapis blue leather bag to buy at a great price. 😁 If you do visit, make sure you bargain for the bag you want and don’t just accept the first price you’re quoted.

San Lorenzo has a very nice food market, both families met up for some food there at the end of the day. We had been told to try the Florentine traditional meat called Bistecca, but I opted for poultry instead. Bistecca will also be for another trip.

Images of me taken by Abisola Pitan. All Images of Florence taken by Kehinde Pitan except ** the Bronze door image.

How our last day… 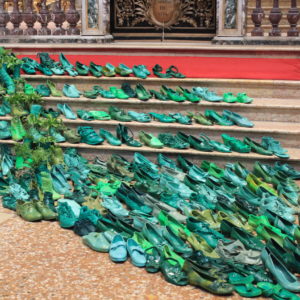 How I Plan To Shed… 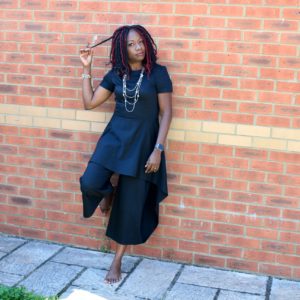